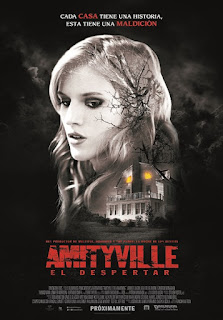 I kept saying that I’d eventually find one of these sequels that I’d like. I knew the moment that I saw the Dimension logo as well as Blumhouse being involved that this may be that flick. Toss in some name actors and I have to say I was excited.

The movie starts off as most of these do with a recap of the killings that kicked off the legend of the house. Then we see a new family moving in. Mom, played by Jennifer Jason Leigh, has brought her family to town to be closer to her son’s doctors. He is in a vegetative state due to an accident that happened when he was defending his twin sister’s honor. The sister is played by Bella Thorn. See actual recognizable names in this one!

They move into the house and of course weird stuff starts to happen. The brother slowly starts to wake up, but he isn’t alone in his head. His twin sister catches on quickly that something isn’t right about what is happening. Of course, no one believes her. Toss in some new school friends that fill her in on the house which leads to a very odd moment where they are talking about the original movie while in a sequel to that movie! That is the sort of clever writing that you get with Amityville Awakening which also includes the best twist I’ve seen in any of these movies.

I suppose that I should give a spoiler warning as I’m going to ruin some parts of the movie. Unlike all the others I’ve talked about this is the one time that you probably want to watch this flick before reading further. You have been warned. Like I’ve mentioned the story is interesting and has an unexpected twist. The fact that the brother slowly recovers and eventually gets around to shot-gunning his family down wasn’t too shocking. What I didn’t see coming is that the mom had lost her faith in God and moved the family into the house not because it was cheap but to see if the “other” guy would help her child. She purposely put them all in danger to see if evil could help! That I never saw coming and is so different from the characters as victims that we normally get. 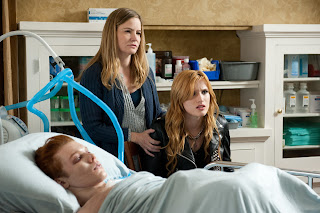 In addition to a cool story, we also get a movie that is packed with some decent jump scares that are setup well with the building of tension as we get to see things moving around in the shadows and other such creepy stuff. The movie has a wonderful rhythm of suspense released by a scare followed by ramping up the suspense again. This is a very well-made flick that I have to say I rather enjoyed. The “transformation” scene of the brother finally getting out of bed and cracking himself limber again also had me cringing. It is done mostly with sound and an actor that can contort his body around, but it is effective.

In addition to Thorn and Leigh there is also an appearance from Kurtwood Smith as the doctor. He is a welcome addition and does a solid job in his supporting role. Overall, this is by far the best of the franchise since maybe the remake which I will get around to reviewing eventually. If you have to watch an Amityville movie, then this is the one to check out. Especially if we are talking about any of the many sequels that have been coming out.

Posted by Gutmunchers Lives at 10:11 AM