Ladies and Gentlemen, the shit show continues with yet another entry into the Amityville franchise. This time we have a new family that builds their house on the foundations of the infamous haunted house that we all know and love. There is also a shed outback that has a dollhouse that looks awfully familiar. When the car mysteriously starts and smashes the youngest daughter’s birthday bicycle the quick-thinking parents swap out the dollhouse as her gift. Those tricky ghosts!

Things start to get strange when the dollhouse begins to take over. There are demons that seemingly can bounce between both places. Initially they don’t notice the changes happening but then the cracks begin to show. This is also a blended family with one young son wishing he could see his real dad, who he apparently remembers more fondly than he should. I’m sure that the ghosts/demons won’t take advantage of that! There is also a spiritualist sister and her husband who are able to lend a hand when shit gets really weird.

Just in case you haven’t noticed yet I do like a cheesy movie. Amityville Dollhouse is certainly that. The story is utterly predictable as it zips thru the runtime checking all the boxes that we would expect from a movie in this franchise. And yes, that does include some alluded to incest feelings, this time stepmom to stepson… so I guess it really isn’t. Though it is still creepy. There are the bumps in the night and some scares, though I was a little disappointed in the latter. We do get a funny gag with a wasp cockblocking a dude with the only way to save him is by pouring booze down his ear hole. I’ve not seen that before so kudos movie. And of course, the dead ghost dad tries to get his son to kill the family. I mean that is an Amityville tradition. 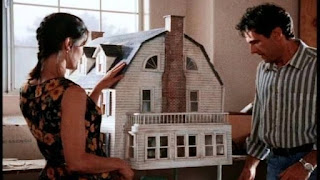 I realize that the review doesn’t sound terribly positive at this point. But here is the thing about this one. It never for a minute takes itself seriously and like I said before is cheesy from start to finish. The acting borders on goofy with some of the cast chewing on the scenery. We get some gratuitous gore with a crispy girlfriend that I found fun. The creature design of the demons when we eventually see them is my old favorite “guy in a rubber suit” model. I mean they didn’t overthink this one. It also helps that the pacing is spot on with something interesting happening every minute the movie rolling. Not once in the ninety-two-minute runtime was I bored or looking at my watch. I can’t say that about many of these Amityville flicks so far.

In the end is this a good movie? No probably not. But as a fun way to kill an hour and a half I’ve seen much worse ideas. So far in the franchise this might be my favorite of the bunch. Again, these are all new to me from here on out… except for the remake that is. I’m hoping for some hidden gems over the next thirty-five or so movies. This might have been a terrible idea.

Posted by Gutmunchers Lives at 9:44 AM