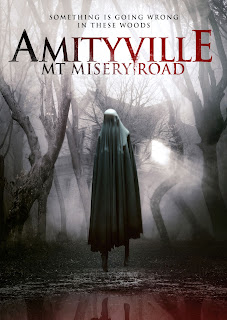 I must warn you that this isn’t going to be a pleasant review to read. This “movie” checked a lot of boxes on my shit list and I’m not going to shy away from going into detail about them. If you don’t want to hear me rant, then let me save you some time and let you know that this is a steaming pile of diarrhetic excrement that I don’t recommend. With that out of the way let us proceed with the rest of the review.

Our main characters are Charlie and Buzi, played by Chuck and Karolina Morrongiello, who I believe are married. I could check to verify that but there is no way I’m wasting another millisecond of my life on this movie. They are going to check out the most haunted road in America which is of course Mt. Misery Rd. We get to watch them do stuff before doing more stuff and then getting on an airplane to fly from Florida to New Jersey only to do more stuff. Eventually after most of the movie has passed, they do check out the titular road which means leaving it and wandering into the forest because it turns out the road means shit all to the story. Stuff happens and then mercifully it ends.

I believe that the most important observation that I can make about Amityville: Mt. Misery Rd. is that it isn’t a movie. I’m not saying it is a bad movie, I’m telling you it simply isn’t a movie at all. Allow me to elaborate. Things kick off with some old pictures and some word salad that I believe is supposed to establish that the stretch of land the road crosses is cursed. Then we watch Charlie drive his car on the highway. Not the titular road because he is still in Florida at this point. He is just driving and shifting gears and whatnot. Eventually he pulls up to a big house where I suppose the action is going to start. But instead, he goes to his mailbox and gets the mail, then proceeds to walk to his front door go in and stroll over to the kitchen where he sorts the days correspondence. Fellas watching someone do their errands isn’t a movie. We don’t need to see all of this to establish what is happening, but when you don’t have a story then I guess you have nothing else to put in.

Charlie finds an envelope filled with pictures of orbs, which is actually like five or six which he keeps flipping thru. First who sends actual pictures via snail mail anymore? Email that shit! He gets excited and calls out to his wife, Buzi. Now I don’t want to be unkind, but she is a terrible actress. Not sure if it is her thick accent or just an inability to deliver a line but she is nails on a chalkboard bad. Though she is very pretty and before you think I’m being creepy keep reading to see what happens later. While he talks on the phone Buzi Googles Mt.Misery Rd. We spend a few minutes watching her Google and read various websites while Charlie is chatting on the phone before eventually joining her.

Then Buzi announces that she is hungry, and we then see her doing a sexy dance for Charlie at a bar while a song plays about her being hot and stuff. Oh, she must have changed too because she is now in some booty shorts that the camera keeps focusing on. Again, she is a pretty lady and I guess that Chuck is quite proud of her in real life (again I think they are married) but damn it I signed up for a ghost story. They get some food and find a guy who is from the area and keeps telling them not to go while struggling to not look at the camera while stumbling over his lines.

So far we have watched some driving, checking the mailbox, Googling some shit, and of course sexy dancing/getting food. This isn’t a movie this is what my parents used to call “puttering around town”. Don’t worry though we get a montage of them at the airport horsing around, another visit to a restaurant in New Jersey where they meet an “expert”, and another getting ready for bed montage where we get an even more revealing and lingering set of shots on Buzi’s buttocks. This is starting to get creepy dude…

Eventually they make it to the woods and the last ten minutes, you heard me right it takes that long to get to the actual spooky stuff which isn’t spooky at all, where Buzi walks around calling out for the now missing Charlie.

In conclusion nothing happens. There is no story, the dialogue is clearly improvised by folks that have no aptitude for doing such things, and our lead actress has the most annoying voice I’ve heard since Woodchipper Massacre. The proceedings are shot on what I believe must have been phones with selfie sticks used to get some distance from the “actors”. Just to be clear this isn’t a found footage movie they just didn’t have a third person in most spots to hold the camera. I have no idea how this got made and distributed, but it is an egregious example of the sort of shit that gets out there and wastes our time. It kills me that actual filmmakers who have some talent and are trying to do something interesting don’t get a shot but somehow this nonsense does. While I have more to say I’ve already spent far too much time on Amityville: Mt. Misery Rd. and will finish by saying that this is hands down the worst of the bunch. I know there are another twenty plus to get thru, but God help me if there is a worst one to come.