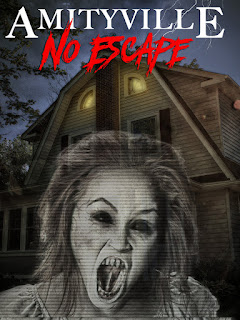 I have hope for this movie. Sure, it is another found footage entry into the franchise but this one is directed by Henrique Couto, He is one of my favorite independent filmmakers working today so there is a chance that this could be good. Might as well dive in and see.

The movie has two main plot lines connected in a clever way. You have footage that a documentary crew has gotten possession of dealing with a woman who moves into a haunted house while her husband is deployed. There are some things that go bump in the night, but she doesn’t freak out. Instead, she does research about the history of the place and starts to feel better about things. Though in typical fashion not running for the hills at the first indication of haunting turns out very poorly for her.

The other story follows the crew of friends who are heading to the house to not so much investigate the supernatural goings on but instead the ringleader is doing a study on fear. This is why he keeps showing them the footage to set things up to I guess scare the hell out of them. He has a friend, his sister, a hippie girl, and a cameraman come along for the fun. There are some creepy bits with a disappearing girl in the woods, a gun wielding local who yells that they are in danger, and other spooky things in the dark. Their story ramps up until they go into the house (they had been camping nearby) where it all reaches a disturbing conclusion that ties both stories together in an inexplicable but sort of neat way.

This is certainly one of the better ones so far. The cast is decent and is given an actual story to work with. I liked the fact that there are a couple of plot lines that jump back and forth. This allows the movie to avoid getting boring as they can quickly shift from spooky to mundane and back. To enjoy a paranormal movie like this I’ve always felt that you need to have a safety valve to give the audience a chance to take a breath. Mostly because it is nearly impossible to sustain a high level of suspense for too long without it feeling forced.

There are several jump scares that work as well as a lot of creepy atmosphere to set the tone. I was interested in what was on the screen from start to finish. This reminds me that I wanted to mention that the editing here is perfect. The movie clocks in at seventy-eight minutes without a single wasted or bloated scene. Overly long scenes or unnecessary dialogue/characters has been one of my biggest complaints with a lot of these Amityville movies and here director Couto avoids all of that. Not surprising since as I’ve already mentioned he is one of the best directors working in the low budget scene today.

Is Amityville No Escape a perfect movie? Not at all. There are some corners cut due to the low budget and some of the gags don’t work as well as they could. But the important thing is that I got believable characters in a story that never bored me. This is another solid movie that I can recommend, though this time without qualifications (See my review for The Amityville Terror for explanation). Two decent entries in a row. Could this mean they get better from here on out? Spoilers… hell no!

Posted by Gutmunchers Lives at 5:46 PM