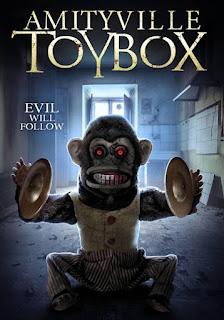 My nightmare continues as I review yet another Amityville movie here for the site. This time around the universe doubled down on my misery by making me watch a Dustin Ferguson flick. If you don’t know that name count yourself lucky. I’ve already had to sit thru his Camp Blood installments so I’m not looking forward to this.

It starts as many of these “Amityville” movies do with a guy walking around killing his family. Then we jump forward forty years and see a guy giving himself a pep talk in the men’s room. He is on his way to a family reunion/fiftieth birthday party for his father. One of the gifts given at the party is a toy monkey that has cymbals that clap together. He had one just like it when he was a kid and thinks that it is a thoughtful gift. Just like the lamp, clock, and mirror before it the thing came from “that” haunted house in Amityville. Sure enough it has evil attached to it and suddenly Dad is talking to his dead father who convinces him to go on a shooting spree.

He kills everyone, but there is still fifteen minutes to make up the minimum runtime for a feature, so we get some random paranormal investigators at the house. They walk around and there is a possessed hitchhiker upstairs. But that still isn’t enough so a random old guy at a factory who is up to no good. With some extra long end credits that gets us to the necessary runtime. Do those last two things have anything to do with the story? Nope. But since there is a sequel to this movie they must connect there, right? Also nope. 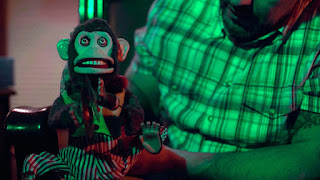 I’ve never watched a Dustin Ferguson movie that didn’t feel padded out with little to no actual story. The Amityville Toybox has that same issue. There is a kernel of an interesting plot here with the family dynamics, but it quickly gets lost in the morass of fully clothed sex scenes, random walking around the house, siblings yelling at each other, and getting ready to go to the zoo. The murders seem to take forever to get to, but that is odd since this part of the story takes up maybe forty-five minutes of the runtime. That is how poorly staged and paced the proceedings are. Nothing happens most of the time and when things do happen it just isn’t good.

The acting is bad with people expressing either anger by yelling and all other emotions with a lifeless stare. Maybe if I had liked any of these characters the movie might have had more impact and therefore been more interesting. The movie is filled with continuity errors, especially shifting between day and night without warning when it is supposed to be a few seconds or minutes between scenes. The audio is sketchy and the camera work as well as lighting leave a lot to be desired. This is just another bad movie in a franchise that I’m regretting taking on more and more as the sequels keep coming. This is another one you can skip.

Posted by Gutmunchers Lives at 8:34 AM