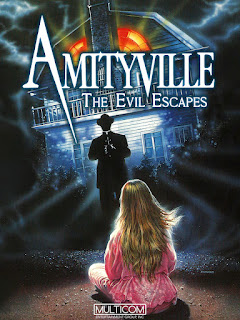 Here we go boys and girls. Time to dive into the fourth movie in the official Amityville franchise. This movie opens with some cars pulling up to a familiar house. The doors open and an army of priests exit. They are there to finally put an end to the evil of the house and as a group start to exorcise the place. One of the priests is injured and while he is in the hospital, we see that the contents of the house are sold at a yard sale. Honestly what sort of nut job would buy something at a haunted yard sale?

An evil looking lamp is purchased and sent from one sister to another as a gag gift. This lamp was how the priest was hurt and he knows that the evil of the house escaped into it. Oh see now the title makes sense. The lamp arrives at a new house on the west coast and starts to haunt the family that lives there. Patty Duke is a recently widowed mother of three who has moved back in with her mom, played by Hollywood Legend Jane Wyatt. Some bad stuff happens, they blame each other, and then finally the priest shows up and the lamp is defeated. Or is it? I think there is an evil cat or something right before the credits roll.

This movie has a solid cast which is totally wasted on a script that meanders pointlessly from one boring scene to another. This is a “spooky” movie that spends more time on how grandma doesn’t approve of how the kids dress then it does on the ghost/demon that is supposedly haunting the family. While Wyatt and Duke are really good actresses, I found their scenes to be flat and honestly didn’t care about the family dynamic. I signed up for a horror movie, not a Hallmark flick where they have to settle their differences so they can live as a happy family unit again. 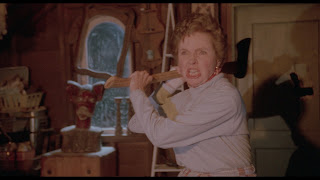 The above complaint isn’t helped by an utter lack of scares. There is a creepy bit where an arm gets tossed over Duke’s shoulder while she is in bed (supposed to be her dead husband I think) but that is about it. They keep showing us a “scary” face in the lamp that is actually more laugh out loud funny than it is spooky. Plus, it’s a freaking lamp. What could be less scary than a freaking lamp? I guess maybe a clock… Oh hell. Being a made for television movie this also has a lack of gore with a hand in a garbage disposal being about as bloody as it gets. I know that these Amityville movies were never about the blood and guts but give me something to be interested in.

If you haven’t figured it out yet I’m not a fan of Amityville: The Evil Escapes. I had hoped that this far away from the original “true” story they would have finally spent some time coming up with scares and creepy stuff. But I supposed asking that from a ghost/demonic possession flick is asking too much. Pass on this one. Next up is Amityville 5 aka. The Amityville Curse.

Posted by Gutmunchers Lives at 3:49 PM