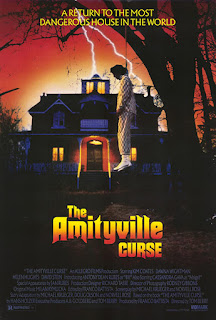 This fifth installment into the Amityville franchise is set in the same town and is tenuously at best connected to the earlier movies. Mostly in the fact that they mention it and that is about all. The story kicks off with a couple looking for an investment property when the woman, who we are led to believe is psychic or at least sensitive, directs them to a different house for sale. We know that this was the home to the local priest who years earlier was shot and killed in the confessional. Seriously this town has some issues!

They buy the house and show up with their friends who also invested to fix it up so they can flip it. We get to see a lot of character development and home improvement stuff. There is also a gag with a nail gun that is okay I suppose. Things get creepy with a disappearing man and his dog. We also have the creepy lady who used to work with the priest showing up with a crucifix and telling them that all will be revealed. Also, there is a spooky basement, plumbing issues, and someone gets their hand cut. Thrilling stuff, right? In the end there is a twist that throws everything into doubt. Was there something supernatural or do we just have a bunch of people with mental health issues? I’m still not sure.

This is the first movie in the franchise that has nothing to do with the house or any haunted item coming from it. Instead, we have a totally different haunting of sorts. Be warned some spoilers are coming so if you don’t like that sort of thing then stop reading. But honestly this is such a terrible movie I’d recommend reading my spoiler and then skipping The Amityville Curse. You have been warned!

Here is the scoop and what annoyed me about the movie. We are led to believe that there is some force haunting the confessional, which was inexplicably moved to the basement of the house and hidden behind a boarded-up door. But in the end, we find out that one of the people working on the house was the killer of the priest. He has blocked out the memory of what he did and was motivated to do so because he was the priest’s child from an illicit affair. So not a ghost but a mentally unstable guy with daddy issues. Um… okay, I guess. I mean they tried something different and tried to fool the audience. It isn’t so much the twist that annoyed me but the execution of it.

This movie is painfully slow. Nothing happens for the majority of the story as we see people fixing up a house, talking about their issues, and drinking wine. This feels less like a failed attempt at character development and more like they didn’t have enough story to fill up the ninety-minute runtime. I can’t stress enough that except for the last ten or fifteen minutes nothing happens! The sad fact is the cast is solid and The Amityville Curse is shot well.

What is the moral to the story? Have a damn script before rolling the cameras! I can’t recommend this one either. Sooner or later, I have to find an Amityville movie that I really like. I mean the laws of averages would dictate that. Next up is Amityville 1992: It’s About Time.