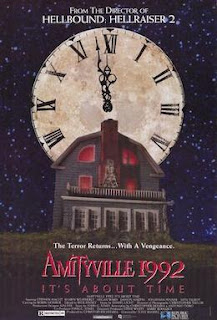 Remember a couple reviews ago when I was asking what could be worse than a haunted lamp and I derisively said something about a clock? Well, here we are… The story kicks off with dad coming home from a business trip with a mantle clock he picked up on the east coast aka. Amityville. He seems very proud of it and immediately unpacks it setting it up in the living room. When no one is looking a little drill pops out of the bottom of the clock and I guess it possesses the house.

Suddenly everyone starts to hallucinate, rooms shift back and forth in time, a neighborhood dog goes bonkers, and evil runs amok! The woman who is in “the know” and could possibly stop things from happening gets “storked” and the ex-girlfriend who was watching his kids ends up doing battle with him and the house to save them. I mean she totally fails but no worries since Amityville 1992 decides to use the old “hey it never happened” trope to reset back to the beginning and lets her prevent it from every happening. You know because time travel and stuff.

How do these movies continually fail? The story is a little better than the previous installment and does have a narrative that you can follow. Things are spaced out evenly and while not a thrill ride it isn’t boring either. I thought that the time travel element was an interesting twist to the story and allowed them to do some world building. But instead of focusing on that we also get a love triangle between the dad, his ex-girlfriend, and her new guy. I did find it amusing that the new boyfriend was played by Jonathan Penner who is best know for being a contestant on survivor. They also write the characters to be very unlikeable. There is no one to root for except maybe the clock. And I can’t stress enough how much I hate the “it never happened trope” which wipes away everything we just watched. I can only think of one movie where it worked, and this isn’t Wishmaster! 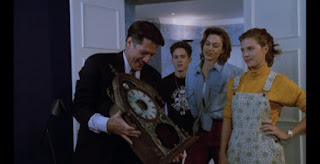 Here you have another good cast with Megan Ward, Nita Talbot, Shawn Weatherly, and genre favorite Stephen Macht. Other than Macht, who gets to chew some scenery, they are all wasted with little or nothing of interest to do. Like I’ve already mentioned above the script does them no favors. No matter how professional and talented your cast is they need something on the page to work with. We do get a brief but appreciated Dick Miller sighting though, so that is cool.

The kills are tame, and I have to say that I don’t think that whoever wrote this script has a good understanding how guitar amps work. And while I’ve been fairly negative in my review, I will give the movie credit for the title. It really is about time… heh I made a funny. My final thought before declaring you should not watch Amityville It’s About Time is this. People need to stop going to yard sales at the murder house! That is all. Now onto Amityville: A New Generation.