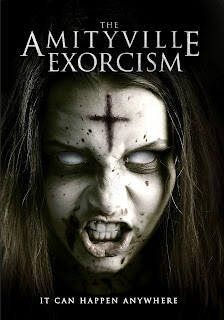 I’ve done several of these marathons but this one is really starting to wear on me. But I’ll carry on because I’m an idiot. I honestly don’t know what the hell I was thinking. They are making these things faster than I can watch them!

The movie kicks off with the typical footage of someone doing away with their family. This time he uses a hammer to beat them to mush. Though it is offscreen so don’t get too excited. The next scene is at the prison where our killer is on death row. He is visited by a priest and confesses that he worked on “that” house and took some of the lumber from there to other job sites. Yep, this movie is all about haunted two by fours! So, the priest goes looking to save the unsuspecting families from the evil wood.

Our main characters are an alcoholic man and his daughter. They are having difficulty getting over the death of his wife/her mother. He is a jerk and unfortunately the evil wood takes advantage of the drama to possess her and send her out on a killing spree. After giving her “not boyfriend” a fatal hickey the priest and dad have to do battle with the demons to set her free. All I can say about this part is that someone watched the Exorcist a few times. Oh and the drunken dad also burns the hell out of some perfectly good hot dogs in what is the most disturbing part of this movie.

This movie was directed by Mark Polonia which used to mean something to me. His latest output hasn’t been very good and sadly I’d have to add Amityville Exorcism to that list. The story is incredibly slow with long stretches of scenes that do nothing to move the plot along. This includes a bit with the world’s worst burglar breaking into the basement of the now haunted house. After announcing his presence with “Business Time!” he is dispatched by the evil lumber which also somehow disposes of the body. The “not boyfriend” is there to show up in a few scenes to talk to the daughter about how awful her dad is and then to get killed. I feel like they could have done something with his character but didn’t. 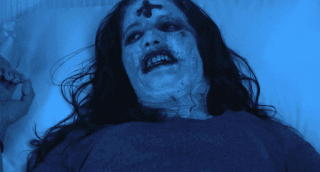 The exorcism is straight out of the much more famous movie that I mentioned earlier. Though I did doubt the wisdom in using bungee cords to tie her down. The makeup effects work isn’t low budget… it is zero budget. The demon who we keep seeing looks like he is wearing a mask and robe from Spirit Halloween and the possession makeup looks like the zombie makeup kit you can pick up from the same store for ten bucks. You used to be able to count on a Polonia movie to have better makeup and gore than this. I will give them some credit for the burglar getting his guts pulled out, but that is it. The rest is disappointing.

While not as awful as some (see the last entry in this marathon) Amityville Exorcism is bad. Cheaply made without much of a plot I’d recommend skipping it. If you want to watch some vintage Polonia Brothers goodness, check out Splatter Farm.

Posted by Gutmunchers Lives at 12:59 PM