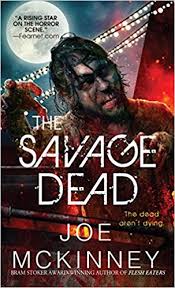 Time for another book review. As I mentioned in my review of the Day of the Dead remake the recent popularity of zombies has flooded the market with all things related to the undead. Not only movies and television shows, but books as well. Joe McKinney is one of the authors who jumped on the trend. I figured it was about time to check out one of his entries to the genre.

Senator Sutton has been attacking the Mexican drug cartels where it hurts, their wallet. They have already tried killing her a couple of times, including a second attempt at a Washington D.C. hotel that happens at the beginning of the book. Because of her excellent team of secret service agents, including our main character Juan and his love interest Tess, they have failed. But now with Sutton taking a cruise up and down the Mexican coast thumbing her nose at the cartels they hatch their most devious attempt yet. Thru some legitimate businesses, a cartel leader has developed a super bug that will kill and reanimate those infected. His plan is to use a beautiful female assassin to unleash the plague and make sure the Senator dies very horribly and publicly. Much death, undeath, and mayhem ensues.

I enjoyed the hell out of this book. The first third is spent establishing the characters and setting up the virus and how it spreads. This is where McKinney shows his skill as an author. I’ve read many zombie novels and most of them handle the action well enough. Creating the characters and setting the “rules” for the world and infection are not always well done. Here we know the characters, have a good idea how they will react, and most importantly (to me anyways) know how the zombies can be put down and how they will attack. This is important because I don’t want to be distracted when the action kicks into high gear.

Boy there is a lot of action. Many shots are fired, much flesh is gnawed, and many sad situations occur. Characters get separated and meet new people some of which meet horrible fates, others force them to face old fears and some new ones. This adds a depth to the story that wouldn’t have been possible without them being established so well earlier in the book. Also along the way Juan realizes something that I as a reader already knew, he has feelings for Tess. So not only is he driven to do his job and save the Senator, but he wants to save her as well. This adds tension to the times that Tess is put in danger and when one event happens I was kind of pissed off. A good author can write an entertaining story, a great one sucks you in so that you are invested and care about the characters. McKinney certainly had me rooting for and against certain characters.

The setting is another huge plus for the book. Most of the zombie novels I’ve read either take place as an outbreak has started or after the world has gone to hell. Nothing wrong with an apocalyptic setting but the fact that this is an isolated attack using zombies as a weapon was different and cool. The characters had a world to go back to if they survived. Gave the narrative a vibe that you normally don’t get from a book with zombies shuffling around.

I imagine it is obvious that I’m going to recommend The Savage Dead. I know that McKinney has a lot of other books in print including a zombie series. I’m going to have to check those out as well.