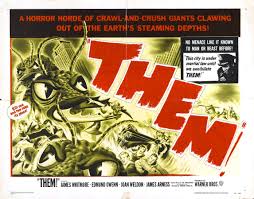 Horror and Sci-Fi cinema of the ‘50s were choked full of giant bugs mutated by the atom. This is one of those movies. Here humanity must do battle with giant ants that have crawled from the irradiated desert of the American Southwest. Time to check out Them!

A police cruiser is searching the desert with the help of an aircraft as the movie opens. They discover a little girl wandering in the desert and trace her back to a camper. But they can’t find anyone else, not even any bodies. Heading to a nearby store they find it wrecked and the owner killed! But they still have no idea what is going on. They do find some tracks and end up sending them to Washington D.C. to be identified. This brings a scientist and his daughter, the doctors Medford, who team up with one of the original police officers and an FBI agent. The four of them discover that a nest of giant ants has sprung up in the desert. But before they can destroy it a pair of queens hatch and head out to start new colonies. They must be found before they multiply and destroy us all!

Maybe this is going to spoil the review but I must say right from the start this is a great movie! The plot follows the typical pattern of the unknown threat that creates a body count. Government agents get involved and recruit scientists (one of which is normally a beautiful woman/love interest). They do battle with the threat and eventually stop it, saving humanity. Nothing wrong with following a formula when it is done correctly and Them! nails it. The pacing as the story unfolds is spot on. The missing girl in the desert and the destroyed store set the scene. Then we get our first kill in a manner that we know it hasn’t ended well for the victim, but we the viewer still aren’t sure what happened. It isn’t until one of the main characters is in danger that the ants are finally shown on screen. After that the action keeps up as the first nest is destroyed, the search for the queens happens, and then the final nest is discovered.

Not only is the movie exciting from opening to closing credits but it does something that is unusual for a ‘50s monster movie. Be warned spoilers are coming. Most of the time you get the hero introduced early in the movie. Here we get introduced to Sergeant Ben Peterson, one of the police officers that finds the little girl. While later we meet the scientists and the FBI agent (played by James Arness) Peterson is at the center of the action. Well at the end of the movie they kill him off while saving a couple more kids. That’s a twist that just don’t see in these movies and was a huge shock when I first saw Them! years ago. This makes it stand out from what is admittedly a crowded field of ‘50s creature features.

When talking special effects work I always judge it on the era the movie was made. For the ‘50s Them! has top notch effects work. Obviously, we don’t get any bloody kills but the work on the ants is great. They are giant prop puppets that don’t move much but that still look good on screen. They do look like ants and are creepy. Some of the creatures in these movies can be so bad it is distracting.  It makes a huge difference that these are done well. Oh and we get more than one onscreen at a time, which is also very unusual as budgets normally dictated one creature.

Growing up almost every one of my weekends were dominated by watching old monster movies. While I love the classic Universal Monsters and the various Alien invasions my favorites have always been the giant bug movies. It didn’t matter if it were a spider, mantis, or even grasshoppers I was always down for a man vs insect battle. Of these movies Them! has to be one of the best.