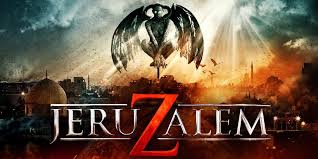 New horror movies aren’t really my bag. They tend to rely too much on jump scares, CGI, and so many use the found footage trick. Still I end up watching a lot of new horror movies in the hope that I find that one gem in a sea of mediocrity. Jeruzalem has been hanging around my Netflix queue for a while so I thought I’d give it a chance.

The story follows a couple of Jewish American girls, Rachel and Sarah, on their vacation to Israel. On the plane, they meet a young man named Kevin and the three of them head off to Jerusalem to see the sights and party. Of course, they picked the wrong time as not long after they arrive judgement day happens and the dead rise from the grave. But these aren’t your typical zombies as they have wings, seem more demonic, and there is at least one building sized giant stomping around! Now they are stuck in a warzone looking for a way to escape. Joining them is an ever-decreasing group of survivors that is seems exist solely to get picked off along the way.

Not sure how I feel about this movie. On one hand, it has a very interesting and original take on the undead. They can only be taken down with head shots and they will infect and “turn” people like zombies. But they also fly, have intelligence, and generally behave more like demons or evil spirits. I like creative filmmakers who try to be different and make their own rules. Also, I want to give them a lot of credit for not explaining everything. The audience never finds out exactly what the creatures are. I mean where the hell did the giant zombie/demon thing that we see stomping around come from? This is carried on right thru to the ending which hints that things aren’t going to end well for humanity.

That was the good now onto the bad. Unfortunately, the movie uses the one gimmick that I hate most about new horror. This isn’t a found footage movie per se, but they use the first-person perspective. Most of the movie is shown from Sarah’s point of view. She is wearing some sort of smart glasses that I guess are recording the events. Since they have an internet connection we get to watch the glasses identify and bring up Facebook profiles, pull up maps when they get lost, and play music! And I thought the nausea inducing shaky camera work in a normal found footage movie was annoying but they really upped the ante.
The reviews where I either love or hate the movie are easy to write. When I don’t have strong feelings either way things get far more difficult. Do I recommend Jeruzalem? The movie is interesting and the cast is decent. I thought they did a very good job with the effects work which is mostly CGI. We get some obvious jump scares, but they also have some well-done creepy sequences that stand out. I just wish they had tried to tell the story in a more traditional way without the first-person perspective. And I could have really done without all the distractions from the glasses.

Okay decision time. As I said earlier I watched the movie on Netflix so it didn’t cost me anything but a couple hours of my time. That is what I recommend. I’m the kind of person that will watch a movie that I enjoy again and again. Jeruzalem was interesting enough to watch once but I can’t imagine ever needing to see it again. The old saying “One and done” fits well here. So catch it for free or maybe rent it, but I wouldn’t waste money to buy it.

Email ThisBlogThis!Share to TwitterShare to FacebookShare to Pinterest
Labels: '00s and beyond. The new stuff, Featured Creature Devils and Demons, Movie Review