Well I just can’t stop watching questionable low budget zombie movies. Sometimes they are awesome but most of the time they aren’t. Disaster L.A. is one of the bad ones. I guess that is a spoiler of sorts. But then again it isn’t going to take much for you to realize that. Hell, my plot synopsis should tell you all you need to know. 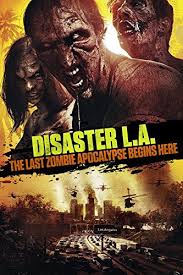 So, there is this party in L.A. with some friends hanging out. They are celebrating one year in the big city. The news starts to talk about some asteroids headed for Earth, but not to worry they are going to miss us. Given what I had to sit thru I really wish they would have. The asteroids are made up of water and when they hit L.A. they give off this noxious smoke. It kills some of the people who breathe it, while others are okay. Why? I have no clue. Those who die from breathing it become zombies who want to eat people. Being L.A. our survivors decide to go to the beach. That is about it.

This movie is the audience watching the cast run around empty parking garages, apartments, and hallways for most of eighty minutes. When they do venture out, we get to see cars driving leisurely in the background and the cast talks about the power being off while walking thru a shopping area that has lights blazing everywhere. Disaster L.A. is guilty of two of my biggest complaints about independent movies. One they tried to shoot a script that they didn’t have the resources for. You set your movie in a big city like Los Angeles and then have no way to have the lights off for you to shoot or to close a street? I get this is guerilla filmmaking and you were likely stealing shots without permits and I appreciate that. But this isn’t the kind of movie that you can do that with.

The other big no no is the script or lack of one. Having the cast run from one spot to another without making any attempt to develop the characters or provide some goal doesn’t work. Their whole plan is to get to the beach and head north. Along the way the movie keeps having a character stop and sacrifice themselves because it is “the only way”. I get that movies like this use that plot mechanic quite a bit, but this movie does it not once, not twice, but three damn times! They clearly had no concept as to the story they wanted to tell. A good zombie movie needs characters to root for or at least some sort of plot arc for those characters to interest the audience. We get nothing near that in Disaster L.A. and it annoyed the hell out of me. Time to talk zombie makeup and gore. The zombies are generic without a single memorable corpse among them. The kills are tame with most everything happening off screen. What we do get to see are a couple mediocre neck nibbles that wouldn’t have killed the characters, a guy getting shot and spitting up a mouthful of fake blood, and a bad digital cut of a guy getting hit by a car. We also get to see a guy missing part of his skull, but it is a painfully bad CGI effect. There is nothing here to be excited about.

I could keep going and mention the random footage shot from a car window of a pre-disaster city that is used to pad the runtime at the beginning, or the painfully bad dialogue delivered by the wooden cast of actors but do I need to? This is a bad movie and I’d recommend skipping it. I spent three bucks for the DVD out of the clearance bin and I feel cheated.

Posted by Gutmunchers Lives at 9:37 AM