The Living Dead at Manchester Morgue (1974)

This is one of those wonderful movies from Europe that had several different names. I’ve watched it under The Living Dead at Manchester Morgue moniker, but it has also been released as Let Sleeping Corpses Lie and the oddly nonsensical Don’t Open the Window. Under any title this is a great movie, but I’m getting ahead of myself. 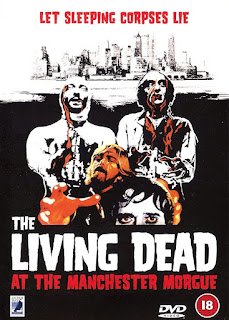 The movie kicks off with us watching a man named George shutting down his shop and packing a few items up in a leather satchel. There is a creepy painting that a mysterious face appears in. Not sure why that is other than it is spooky. This is the face of the main zombie we will meet later. George hops on is motorbike and heads off for his holiday. Along the way he meets Edna who backs over his bike. He insists that she give him a ride to where he was headed to make up for it, which she does. They have to stop for directions and here is where things get tricky.

The farm where they stop is using an experimental new sonic radiation machine to kill off pests without using chemicals. They insist that the process can only affect the simple nervous systems of insects and other pests. Of course, we find out that when you die, at least according to this movie, your nervous system still functions rudimentarily. This means that the bodies get up and are filled with a homicidal rage. There is another funny bit with newborn babies also being bloodthirsty that they briefly touch on. The inspector doesn’t believe any of this nonsense and instead concludes that George and Edna are Satanists out to murder people because that somehow makes more sense to him. There is a big finale at the hospital where bad stuff happens… really bad stuff before it ends on a great “gotcha” ending.

I’ve always enjoyed The Living Dead at Manchester Morgue. The movie has a solid story that while is a bit vague about the rules when and why the dead rise mostly makes sense. This is one of those movies that creates a great atmosphere right away and maintains it until the end. We get a lot of wonderful set pieces including a spooking old farm, a morgue, and a great sequence in a cemetery. The characters are interesting though not fleshed out much. This is especially so for the George character that hates cops and the Inspector who thinks the worst of him because he is a degenerate with long hair. In fact, the Inspector doesn’t have a name and is just referred by his rank. That is odd, though sort of makes sense since he represents authority and isn’t so much of a character than a symbol.

This movie has a real anti-establishment vibe to it. George is rebelling against being told what to do because he just doesn’t like it. But as we see the rush to judgement and the way that the system works you can’t disagree with him. Between the Inspector and the government men that keep towing the party line about how the machine had to be tested before it was given to them, we see that those in the system are wearing blinders or at least not thinking for themselves. I find that kind of political message interesting and it is blended so well here that it doesn’t interfere with the kick ass zombie action.

Speaking of that we get a very respectable eight kills onscreen. There are a few people getting choked to death, but we also get a nifty axe to the noggin’ someone gets shot, a copper gets his guts ripped out and munched on, but the best is the hospital operator. The zombies get her and tear her torso apart onscreen in one of the coolest early bits of gore you will see from the zombie genre. Did we see better later? Of course, but this was more explicit than anything that I can remember preceding it. It raised the bar and for that the movie should be praised. Toss in a couple fun post kill bits with a severed hand and a morgue attendant that has gone to pieces and there is enough of the red stuff to keep gore hounds happy.

I put The Living Dead at Manchester Morgue right up there with Romero’s original trilogy and Fulci’s zombie outings. If you know how much I love those movies (cheap plug… check out my reviews) then it shouldn’t be any surprise that I’m going to highly recommend this one. It is a must watch for anyone who considers themselves to be a fan of the zombie genre.