This one showed up online and the title grabbed my attention. It was shot in the early nineties but never found distribution until recently. That should be a red flag, but I like Ninja movies and of course I enjoy a good zombie movie, so I just had to give this one a chance. I’m glad that I did. 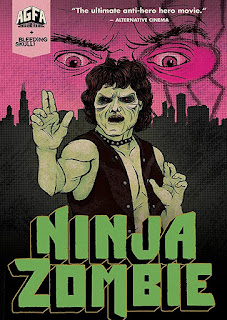 Orlan Sands works at a museum and while waiting for the bus he is attacked by a couple of muggers. A ninja comes along and saves him, but he isn’t a good ninja. He works for the Red Spiders who want the Urn of Prometheus. Sands knows where the excavation site is, and they blackmail him for the information. This causes Sands to find his friend Jack and ask him for help. When we meet Jack, he has just gotten engaged to his girl Maggie. Immediately some ninjas show up to beat on Sands and Jack goes to his aid getting himself killed for his efforts. Crazy the hero dies already!

Well you did catch the title, didn’t you? Sands still needs help and goes to Brother Banjo a voodoo witchdoctor who is also a tennis enthusiast. They raise Jack from the dead and since he was apparently a ninja before he died, he now becomes a Ninja Zombie. The rest of the movie is Sands trying to keep the urn from the bad guys as Jack learns how to be a super badass karate guy again, which of course leads to a training montage! Eventually the Red Spiders kidnap Maggie and it takes both Sands and Jack’s efforts to save the day… sort of. Actually, now that I think about it I don’t think anyone was actually saved.

This is a weird but great little flick. First thing I noticed is that it was shot on 8 mm film which gives it a unique look. Given the timeframe I had assumed VHS or Super VHS, but this was a welcome surprise. There is a grainy look that makes it feel like a much older movie. The pacing is okay as the movie knows where its money shots are and keeps the dialogue and character development to a bare minimum. The movie clocks in at a tight eighty-seven minutes and doesn’t overstay it’s welcome.

Some other things to point out are the bad acting. The cast struggle with the dialogue and certainly don’t do the emotion “thing” very well. It is obvious with the love story between Jack and Maggie that neither of them had the skills to pull convincing emotion off. Luckily, we get a lot of ninjas so that isn’t a deal breaker! The fight choreography isn’t very good, but it is goofy enough that I found it enjoyable. Yeah maybe it is obvious when zombie Jack is surrounded that the extras are awkwardly waiting their turn to get kicked in the face but what are you going to do? This has a cheesy vibe that I dig.

The gore is okay. We don’t get any zombie mayhem as no one is eaten or even bitten. But there are some stabbings, a throat cutting, throwing stars thru hands, and an arm gets ripped off and used as a weapon. The makeup on zombie Jack looks way better than I would have expected. Given what had to be a very small budget they do a great job. And while this isn’t traditionally the sort of makeup effects that I would mention there are some amazingly quaffed mullets in this bad boy.

I’ve saved the best for last. So many independent zombie movies like to toss in someone watching Night of the Living Dead in their movie. I always complain about that because inevitably your movie isn’t nearly as good as Romero’s classic. Here the filmmakers decided to shoot a sort of parody of one of the famous scenes and it is hilarious. It’s very creative and in my opinion if you must do it this is the way you reference a movie like Night of the Living Dead.

Ninja Zombie isn’t a great movie, but I think it is a fun one. This is a perfect choice if you are looking to kick back and have a few laughs while not thinking too hard. I was entertained and that is all you need sometimes. I recommend Ninja Zombie.

Posted by Gutmunchers Lives at 11:42 PM