I’ve been an avid consumer of bad and cheesy movies for most of my nearly fifty years on this planet. After all that time you would think that I’ve seen them all, but you’d be wrong. I stumbled over this one while digging deep on Amazon and was intrigued by the brief synopsis. A martial artist has to do battle with a demon in the subways of New York City… Sign me up! 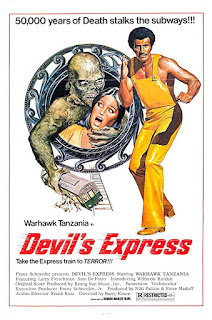 Things get kicked off in China in 200 BC. Some monks are taking a crate and hiding it in a cave. After that they are killed, by one of the guards who kills himself after everyone else is dead. I suppose this is to keep some terrible secret safe. Which we find out later was a demon locked in the crate by a magic talisman.

Flash forward to the groovy seventies and we meet Luke and his buddy Rodan practicing martial arts in New York City. After talking about the neighborhood and the gangs that infest it they head to China for some training. Rodan isn’t that into it and stumbles on the cave, accidentally letting out what was in the box when he picks up the talisman that was keeping the demon contained! It follows the pair home and starts to hunt in the subways of the city. After the bodies pile up a bit Luke eventually has a showdown with the demon.

I can’t say that this is a good movie. It has no budget, which is apparent as it tries to pass off various parks in New York as rural China. There is a distinct feel of guerilla filmmaking as many of the street scenes are filled with people who appear surprised by the camera and actors walking down the street. Also, many of the exterior scenes in the movie have no dialogue as all we get is loud music playing. This is a common trick when you either don’t have the proper gear to capture sound or can’t loop the actors in later. Devil’s Express clearly has some technical issues, most of which can certainly be blamed on the budget. 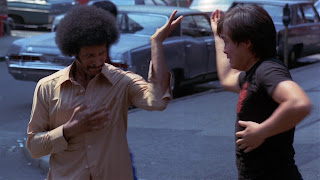 I can forgive money related deficiencies. What is difficult is when I see problems that more money wouldn’t fix. While some of the actors have martial arts skills the fight choreography isn’t up to what you would get from a Kung Fu movie that was actually made in China rather than this one that was clearly inspired by them. If you are making a movie like this, you really need the fights to pop and be interesting. Another problem plaguing Devil’s Express is the pacing. The story plods along with a few interesting bits here and there. Most of the parts that I liked had to do with the gang war between the African Americans and the Asians. Sadly, this is relegated to filler as the slow as molasses demon in the subway plot line gets most of the attention.

In the end I think that I liked the idea of Devil’s Express more than I liked the movie itself. Unless you are obsessed with checking out every Kung Fu or Blaxploitation movie you can find, like I am, this movie is one you should skip. Not recommended.