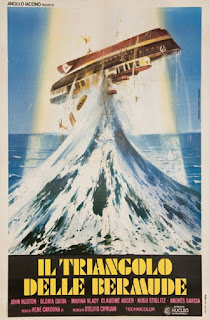 This is one of those movies that is hard to explain. The plot, timeline, characters, dialogue, and generally everything about it are just a bit off. There are bits that I find funny, some that are genuinely spooky, and others that pissed me off for their cruelty. I guess I’ll just have to dive in and explain myself.

We see a little girl on a sailing vessel wearing clothes from “olden days”. I suppose we are to conclude that we are seeing the past. Then the action moves to modern times as we meet the crew of the Black Whale III. They are hired out by a wealthy man who is researching Atlantis and has brought his extended family along for the fun. We see them on the boat for a long time until they eventually reach some ruins. There is a storm, earthquake and one of the man’s daughters is injured. They need to get her help, but suddenly everything on the boat starts breaking down and people start dying. Oh, and the youngest daughter walks around with this creepy ass doll that they fished out of the ocean earlier telling everyone they are going to die.

Cut into the “action” on the boat are tales of various planes and ships disappearing in the Bermuda Triangle. Though the way it is handled they make is seem as if it is going on at the same time, when the actual incidents happened over a century! Don’t worry though because that isn’t the last anachronism we will deal with. The only enjoyable part of the story is the ending and I’m not being sarcastic about that. They do have a decent twist that helps clear some of the confusion up maybe? Yeah not really.

Spoilers follow… You have been warned. Spoiler one, don’t watch The Bermuda Triangle. It is a jumbled mess that is boring and nonsensical. There isn’t a coherent narrative and the only clever bit comes at the very end. After being stranded they finally make radio contact with shore only to be told that the Black Whale had disappeared ten years earlier… Movie over. Seriously the boat disappears and the credits roll. If that was the ending to a better flick it would have been epic. Here it was just a relief.

Other missteps of note. They manage to make all of the characters unlikeable. This is an achievement since the great John Huston appears as well as a personal favorite of mine, Hugo Stiglitz! Both are wasted on this material and appear to just be cashing a paycheck. Most of the movie feels like padding. You have people drinking, arguing, drinking some more, swimming, drinking, and swimming again. I understand why they kept cutting in other disappearances in the Triangle because they didn’t have a story to tell! The movie is almost two damn hours long and they had nothing! Damn it!

If you stick around to the end you will find out that the Black Whale disappeared in the fifties. Not a big deal except for the technology, clothes, dialogue, and everything else is clearly from the seventies. I’m a nerd so I get that might not bother others, but still man what the hell? Speaking of no one else caring. Okay I know that people don’t like sharks and don’t feel warm and fuzzy about them. But they kill three of them to film and add the footage as more padding to the run time. There doesn’t appear to be any reason to do that other than because they could. I’m not a tree hugger but killing something so it can appear in your shitty movie? That sucks.

This movie is awful for so many reasons. Just skip it. Obviously, I’m not recommending it.

Posted by Gutmunchers Lives at 11:23 AM