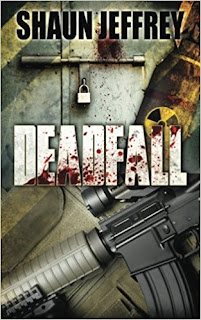 It has been a while since I did a Throwback Thursday here at the Horror Dude Blog. I thought it would be fun to dig into the archives for yet another book review. When I ran the old Gutmunchers site I covered a lot of zombie fiction. Deadfall wasn't my favorite, but it did have some cool things going for it. I might have to dig this one up and give it another read.

Most zombie fiction, both cinematic and written, tends to fall into a couple of categories. Either you have civilians trying to survive against the undead hordes thru their creativity or you have well-armed military types that spend the story blowing them away in interesting and gruesome ways. Deadfall falls into the second of these, but with a couple of interesting and creative twists. We are introduced to a group of mercenaries that are lead by Amber Redgrave (the only woman in the group) who are hired to rescue a couple of kidnapped children. The children are being held in an abandoned mining town, but when the mercenaries arrive they realize something is up. There are no children or kidnappers to be found, but there are plenty of zombies that pour from the nearby mine.

What I found interesting about Deadfall is that interspersed with the story of the mercenary team there is a subplot involving a couple of animal rights activists breaking into a secure facility. Of course, the facility has a connection to the main plot and gives us some background into the test that is being conducted using the mercenary team as the guinea pigs. The end of the book brings both plotlines together and we get to see them resolve quite nicely.

You know I’m kind of torn on Deadfall. The book delivers about what you would expect from a zombie tale. You have an ever-decreasing group of characters getting picked off one at a time. There are plenty of cool death scenes and the author does a good job describing the gore. Though I was surprised how long to takes for the zombies to show up in a book that is only 250 pages long and until they do things drag a bit. The characters are pretty thinly drawn and aren’t terribly interesting. As soon as I realized the protagonist was going to be a woman I knew the book was going to spend too much time harping on how some of the men wouldn’t trust her. The big twist with the characters was far too obvious. I won’t spoil it here by giving too much away, just in case you want to read the book.

As I said I am torn on Deadfall. In spite of some of the things I didn’t like about it there are other parts that are great. I do think the use of the subplot with the activists to flesh (no pun intended) the story out was very creative and works well. Also after the zombies show up the story moves along rather briskly and does a wonderful job holding the reader's attention. At two hundred fifty pages the book is an easy read and not a big time commitment. Bottom line for me is that much like many zombie movies Deadfall is “brain candy”. It isn’t going to challenge the reader, but if you like zombies I think you will be entertained by it. If you are looking to kill a few hours and dig zombies survival stories then I would recommend Deadfall.

Posted by Gutmunchers Lives at 9:53 AM