Time for another Throwback Thursday. This is a review that I did years ago for my old website, Gutmunchers. I've always loved these movie tie adaptations and was very excited to track down the novelization for one of my favorite rentals back in the day. I hope you dig it.


This is the novel that the movie directed by Chuck Sellier was based on and in fact Mr. Sellier helped to write the novel. The story here revolves around a long-abandoned mine that the locals would like to see kept that way. Unfortunately, a mining venture has purchased the rights to it and sends a couple representatives to reopen it. At the same time a group of college kids show up to spend their vacation in an old house in the mountains that happens to sit on an unknown entrance to the mine. What the locals don’t tell the visitors is that something terrible lives down there. A creature or group of creatures that occasionally are forced to the surface in search for food. These are what the locals call the Boogens, and they are hungry again. 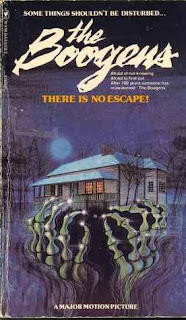 This is a fun little book and an easy read. At only one hundred and eighty pages it is a quick read populated with the typical characters you expect in a horror story. You have the cute girl that falls for the heroic guy, and that happens not once, but twice in the book! There are the locals that don’t want outsiders poking around in their business and are hostile towards them. Hell, the book even boasts the wealthy big shot that is both mysterious and is up to no good. I suppose some might not like the predictable characters, but for me when the story is done right like this one is it can be fun. And the Boogens has a couple of creative things going for it that more than balance out the familiar and predictable characters.

There are dual story lines with the kids at the house and the mine inspectors that don’t really cross paths until the very end of the book, and then only barely. But the authors do a great job bouncing between the two while keeping each moving along quickly towards the conclusion of the novel. There is even a smaller third story involving some locals and the gold located in the mine with the Boogens that is killer and plays an important part in how the book ends.

And what an ending it is! I don’t want to give anything away, but the best part of this book is how the author’s wrap things up. The rest of the book has a very “theatrical” feeling to it, probably due to it being written to support the movie. I mean as I’m reading the book it really did feel like I was watching an old creature feature, which was a blast. But unlike the endings of those great old movies, the Boogens throws a rather abrupt and severe twist at the end that I think will have genre fans smiling. Just do yourself a favor and don’t read the end and ruin it for yourself.

As a novel the Boogens isn’t going to be considered a classic of literature. But like I started my review out saying this is a fun read and worth tracking down a copy. I recommend the Boogens.

Posted by Gutmunchers Lives at 9:31 AM