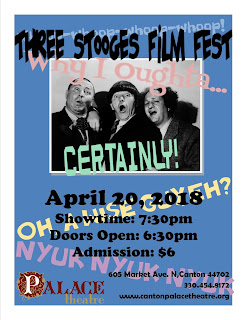 Oh yes, it is that time of the year again when all the Knuckleheads gather to watch four classic Stooges shorts, raffle off some cool prizes, and watch the best Curly Shufflers do their thing on the stage of the classic Palace Theater in beautiful downtown Canton Ohio.

The shindig took place on a Friday night. So, I worked all day with one eye on the clock. Even at my advanced age I get very excited about these events. Heck it makes me feel like a kid again. When I got out of work I jumped in the car and headed out to the theater. Sadly, I was flying solo because all of my friends suck! And some of them had to work… I arrived at the Palace, purchased my ticket, found a good seat, and settled in for the fun.

The first short was Grips, Grunts, and Groans. This was a Curly short and follows the boys as they end up in a real pickle. Tasked with keeping a wrestler sober and ready to fight they of course screw it up. The gamblers who hired them aren’t happy, so the boys decide to substitute Curly in. He is a terrible wrestler, until he smells a certain type of perfume and then he goes all “Woo Woo Woo”. Much mayhem ensues. The second short was Dizzy Doctors. Here the boys are given an ultimatum by their wives to get jobs or get out! They stumble upon salesmen jobs hawking Brighto. Is it a shoe polish? Maybe a spot remover? Nope it is medicine, but they don’t find out until some hilarious accidents happen.

After the second short it was time for intermission. Picked up some candy, watched the Curly Shuffle contest, and didn’t win anything at the raffle. Though that is okay since it all goes to support the Palace Theater. I really do love this place. The lights dimmed again, and the last two shorts of the night started. 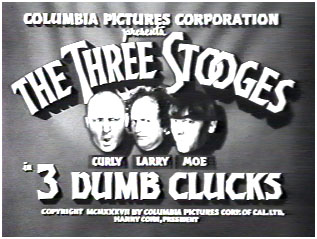 Short number three was Three Dumb Clucks. This time the Stooges are locked up in prison and get a letter from their mother. Their dear old Dad has divorced her and is going to marry a young chickadee who is after his money. They break out to stop him and of course goofy things happen. Here Curly pulls double duty as both one of the brothers and their father. This leads to an awesome bit of mistaken identity that is one of the greatest gags I’ve ever seen them do involving an elevator and some stairs. The last one of the night was Back to the Woods. In olden days, aka. Pilgrims, the boys are banished from England for crimes and sent to the colonies to defend them from the savages. This means they end up doing battle with the Indians while trying to hunt for food. By battle I mean a lot of people get hit on the noggin’ with clubs.

Four Curly shorts and no Shemp? That is kind of a bummer. While I’m a much bigger fan of Curly I do like a Shemp short now and again. I also realized that they played these in the order they were made as they are twenty thru twenty-three. That makes sense why they all featured Curly. I think I’d rather they be more random in the selections, but beggars can’t be choosers and some Stooges is better than no Stooges. If you get the chance to check out one of the events at the Canton Palace Theater do so. It is well worth your time.