It is almost time for my annual Halloween movie fest but before that happens I thought I’d check out another of the British sci-fi movies that Forrest Tucker made while in Europe. I’ve already done the Crawling Eye, so I thought it was time for Cosmic Monsters. 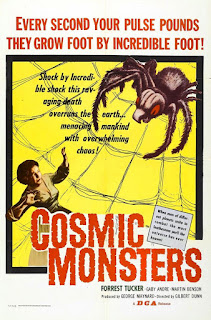 An ominous voiceover warns us of Planet X… the unknown planet. Just an FYI the original British title to this movie was The Strange World of Planet X, but they dumbed it down for us Americans. The keep talking about Planet X so I thought you should know. After this narration we watch as a couple of scientists go about their work on magnetism and the effects of power fields on the environment around them. Dr. Laird is in charge with his American assistant Gil, played by Tucker, helping out.

After a serious accident where the machine appears to power itself for a few seconds a few different things happen. A mysterious man named Smith shows up and asks some very specific questions. A hobo who was previously kind suddenly goes homicidal and kills a girl plus there are other strange goings on and creatures in the surrounding woods. Spoilers to follow. You have been warned. The experiment allowed cosmic rays to bombard the area around the house driving at least a couple people insane, mutated insects into giant monsters, and got the attention of an alien from Planet X! Much fun ensues as the army is called in to shut the experiments down and deal with the deadly bugs.

This is a very British movie and has a seriously talky science fiction vibe for the first forty-five minutes or so. I don’t mind it so much, but I know that some fans find this sort of thing boring so I mentioned it. But when things get going during the last half hour it is a lot of fun. A homicidal hobo, wise visitor from outer space, giant bugs, and one I’ve not mentioned before but we also get a mad scientist! Damn it movie you have given me everything I could have wanted. All of these are woven together in such a way that each plotline gets time to resolve while being tied into a nice cohesive story. This is some excellent scriptwriting.


The special effects work is about what you would expect from a fifties movie. We get a few antennae poking up from behind the scenery, but they mostly use some rear projection to get the bugs on screen. The alien is just a guy in a tweed suit… very British. Though there is some nice miniature work used to bring his ship to life. There is one highlight that I wasn’t expecting but appreciated and that is a kill where a solider fighting the insects has his face ripped off. It isn’t too explicit, but we do get to see some bone poking out. You didn’t see that very often in the Fifties. Overall, I was very happy with what I got with Cosmic Monsters.

This is another movie that I don’t think gets talked about nearly enough. I’ve mentioned this before but maybe it is because everyone is focused on the US productions but the imports from Europe are very decent and in some cases like this and The Crawling Eye push the limits of “good taste” much farther than the American productions. I highly recommend tracking down a copy of Cosmic Monsters and checking it out for yourself.