Here is a movie that I’ve not watched in a long time. It has an excellent cast with Tom Noonan, Gregory Hines, and Albert Finney as our lead. I remember it being billed back in the day as a “modern” werewolf movie, but that was almost forty years ago. It has probably been nearly that long since I watched it. Suppose it is time to revisit this one. 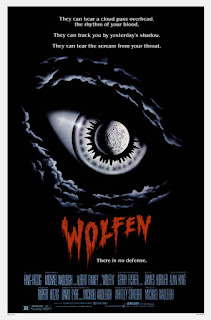 A rich dude and wife are driving around in their limo when they decide to stop at the park. They do some frolicking and some coke… then something shows up and kills them. Since he is a high-profile citizen the NYPD calls on Detective Dewey Wilson to investigate the case. Right away he doesn’t feel that this was a political execution, like everyone else does. He begins looking at other possibilities. With the help of a coroner (Hines) and a zoologist (Noonan) an alternate theory involving Indians and possibly shapeshifting develops. This leads to a very uncomfortable sequence on a grubby beach where we get to see way too much of Edward James Olmos… some things can’t be unseen. Eventually we find out that it isn’t a werewolf or shapeshifter but is instead some nature spirits angry that their territory is being infringed on.

There are things about Wolfen that I really like and others that I don’t. Might as well start with the good stuff. The cast is excellent and have a lot of chemistry on screen. This is especially so of Hines and Finney. When they share a scene together there is a lot of energy and things seem to speed up. Noonan is also a lot of fun as yet another quirky character in a career filled with them who sadly comes to a bad end. The setting of New York City is great as well. Back in the seventies and eighties the city has a certain scuzzy feeling that came across on screen. I’ve mentioned this before in other reviews that filmmakers who knew how to use the city got a lot of production value for nothing. An excellent example of that here is when we get an abandoned neighborhood that looks like a warzone with all the buildings gutted. It is the perfect setting for where the trouble starts.

There are other great locations in Wolfen. We also get a fantastic scene at the top of a bridge that was clearly shot on the top of a bridge. No fancy CGI or green screens here. I was almost getting queasy from it. Though the best must be the morgue scene. Not only do we have tons of naked bodies lying there like slabs of meat but there is a grubby feeling with the not quite white walls and poor fluorescent lighting. It feels like the city itself is another character.


We get a respectable eight kills. Though they aren’t spaced as evenly as I would have liked though there are some good gags. Hands and heads go flying and we get some brains hitting the ground. Those are fun. Sadly, a lot of the kills are off screen, which sucks. The creature effects were very disappointing. The magical spirits that are killing everyone are wolves. Okay cool…  but they just use the same five or six pieces of footage to show them growling. Other than a scene here and there we never even get to see them attack. They basically made a monster movie without any real monster action. I was hoping for some big reveal or payoff at the end but got nothing. That was a bummer.

Since we have officially entered the things I didn’t’ like part of the review I need to mention the pacing. While I enjoyed the mystery being unraveled there is a lot of padding in Wolfen. First up we have the love interested/criminal profiler character. She seems to exist for the requisite sexy times and to be put in danger at the very end. But she has a lot of scenes and dialogue, all of which feels unnecessary and bogs the movie down. There are also a lot of scenes discussing the terrorists and interrogating them, even after the narrative has abandoned that as the cause for the attacks. This is another way that Wolfen shoots itself in the foot and kills any momentum they were building. Finally, the ending is odd. I sort of understand it, but it doesn’t play well and gives the movie unfinished feel. Nothing is resolved. What was the point of the almost two hours I spent watching the movie?

This is a hard one for me to recommend or not recommend. As I’ve stated above there are some good things about the movie and some bad things. I guess the only answer that I can come up with is I hadn’t seen this in almost forty years and I’m not sure that I need to watch it again for another forty. Of course, that is being optimistic that I’m still around then. That non-answer will have to do as my answer.

Posted by Gutmunchers Lives at 2:06 PM