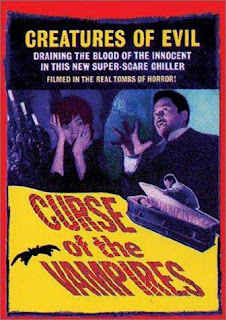 The Escudero family is respected by their neighbors and owns a large villa. It is never explicitly said but they appear to be wealthy and influential. The movie kicks off with a large party with son Eduardo and daughter Leonore being watched over by their father. During the evening he has a heart attack which leads him to sharing a terrible secret with his son. The family has some curse on it that caused their mother to become a vampire. She is locked up in the basement to keep her from hurting anyone. Eduardo struggles with this and eventually goes to see her which doesn’t end well. She bites him turning him into a blood sucking fiend.

From there things get even worse as Eduardo makes some more vampires. Tossed in with this Leonore is not allowed to marry her fiance, Daniel, because her father is afraid the curse might be passed on. Vampire Eduardo also has a weird fascination with her that leads him to some nefarious acts including causing an accident that kills Daniel and frees her up for him. Yeah it gets weird. Eventually the locals wise up and come to the house with torches and crosses. Eduardo is doomed but luckily ghost Daniel shows up to save Leonore’s eternal soul. I did say it got weird…

I’ve already covered some of the later movies from the Philippines including a couple that were co-directed by Gerardo de Leon who is responsible for Curse of the Vampires. Those Blood Island movies are much different from what we get with this one. While those movies are more exploitation and show us a lot of skin and some gore this plays more like a Gothic horror story. Think less H.G. Lewis and more Universal’s Dracula. This is also made for the Filipino market and not to import to the U.S. drive-ins. You get no American expats in the cast though we do get to see Beast of Blood’s Dr. Lorca himself, Eddie Garcia, playing Eduardo in this one. That was cool. I’m not implying that this is inferior to those 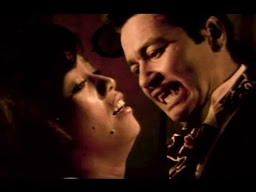 movies, just that it is noticeably different and might bug some viewers looking for more Blood Island flicks. It is also interesting to note that Curse of the Vampires wasn’t released in the states nor did they seem to have any plans too until four years later when they paired it up with the new Beast of Blood. That is a cool Garcia double feature.

There are some plot issues that aren’t ever explained. For example, why doesn’t Eduardo’s father kill his vampire wife long before things go this badly. A simple stake thru the heart does the deed to no one’s surprise which makes me feel like they knew that was an option all along. He also knows that Eduardo had been bitten by his mother so why not lock him up as a precaution? Later when the fangs are revealed he is shocked… so much so he drops dead! Why was this such a surprise for him? I won’t even go into the twist at the end with ghost Daniel showing up to save the day, sort of. Though it is entirely possible that all of this could be explained away as a cultural difference of their vampire legends where director de Leon and his audience are sharing an understanding that I as a western viewer don’t get.

While I was confused at times and will admit there is a bit where the movie drags a bit, I still enjoyed Curse of the Vampires. I don’t think I’ll go back and watch it again anytime soon, but I’m still very interested in seeing more of Gerardo de Leon’s work.

Posted by Gutmunchers Lives at 1:23 PM