Before I begin, I need to warn everyone that the Lost Missile is more science fiction than it is horror. There aren’t any monsters or aliens in this one… well okay there are aliens, but they never make an appearance. Let me try and explain the plot. 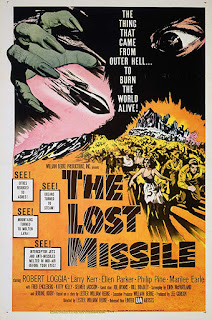 Thru the helpful narrator, whom we get a lot of, we find out that an “Eastern” power has shot at a mysterious rocket approaching the Earth from deep space. They don’t destroy it, but instead just knock it off course so that it is skimming five miles above the surface. Due to the heat generated by its engines it basically destroys anything that it passes over! All attempts to knock it out of the sky fail and the people in its path can’t do much but wait to die. That is until one of our many characters, David, realizes that the rocket he has been working on might be able to reach the menace and stop it. The rest of the movie is his race against the clock to get the rocket launched in time.

The filmmakers were very ambitious with this one. The movie is trying to tell a large story without much of a budget. This means that we are treated to a ton of stock footage. The US and Canadian air forces try to intercept… cue up the stock footage of jets taking off and flying. The cities in the path are locked down… time for the footage of air raid drills. Admittedly that last one is creepy, especially when you think that the civilians hunkered in the subways thought they could live thru a nuclear strike by the old “Duck and Cover” method. We actually get a bit of stock footage of a classroom full of kids doing that very thing. A lot of the movie is played out like this.


When we do have actors on screen most are just snippets of a few talking about the rocket or hiding in a basement. There is a strange bit with David and his fiancé Joan going ring shopping and getting into an argument about how much his work with the rocket means to him. I forgot to mention that David is played by a very young Robert Loggia in one of his earliest movie roles. That was actually the reason that I decided to check The Lost Missile out. I wasn’t disappointed because even with the melodramatic material Loggia is clearly the best actor in the cast and does his best with it.

There is an interesting story here. This is clearly meant to be some sort of atomic war allegory with people hunkered down waiting for the inevitable. I suppose they couldn’t come right out and say it since the military was still trying to convince people that a nuclear war was winnable at this point in the Fifties. Hell, they kept up with that nonsense in some parts right up to the end of the Cold War. The lack of the budget and being forced to “cheat” with all the recycled footage hurts The Lost Missile a great deal. This was clearly a big idea that needed more money to flesh out. I can only recommend this one for those people who like to watch oddities or perhaps are a big fan of Robert Loggia. Everyone else should probably pass.