There are a lot of revenge movies from the seventies and eighties. Hell, Charles Bronson made a career out of them. But instead of starting with him or one of the other obvious choices I thought I’d take a look at this gem starring Jan Michael Vincent. Here we get a whole neighborhood of characters getting some payback against the gang that has been terrorizing them. 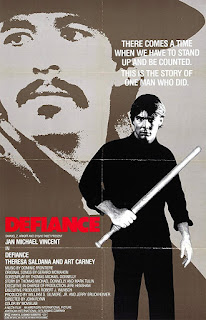 Vincent plays Tommy, a suspended merchant sailor waiting for another chance to go to sea. He ends up in a less than great neighborhood biding his time until he can get back to work. But of course, things don’t go according to plan. The neighborhood and most of the people living in it are decent folks just trying to get along. But there is also a street gang run by a thug named Angel whom they all live in fear of.

Tommy goes out of his way to ignore the gang and their activities, but just can’t. He is a nice guy and befriends the locals including a beautiful young lady named Marsha, which gets him sucked into the conflict. After a few small fights things escalate and soon there is a war between the gang and Tommy. But he isn’t the only person that has been pushed too far. The neighborhood is inspired by his actions, so they join him in taking out the trash! Fires are set, people are shot, and much butt is kicked.

This is one of those movies that I’ve spent most of my adult life watching on and off. I can’t remember the first time that I saw it, but I had to have been in junior high. No matter how many times that I’ve watched it Defiance has always stuck with me. The story has some common themes with most of the others from this revenge genre. You have the reluctant hero that for his own reasons doesn’t want to get involved. Here Tommy is just passing thru and wants to keep his life uncomplicated. But each time someone he cares about gets hurt he gets involved, even if that means putting his own life at risk. Pretty typical stuff but if the formula isn’t broke don’t fix it.

The neighborhood that is too afraid to stand up to the gang is another common theme. It takes an outsider like Tommy to inspire them to fight back and save their homes. By helping him they redeem themselves for years of inaction. There is even a monologue where one of them mentions their other friends who have been hurt and how he is ashamed that they did nothing. The gang is filled with your typical bad guys who are mean just because they can be. It makes them a perfect enemy to pit the more likeable characters against. Again, this is normal for the revenge subgenre.


There are a couple of things that have always made Defiance stand out from the other revenge flicks. First the Angel character shows some compassion in one scene where he gives money to a down on his luck man. That money has come directly out of a stolen wallet, but still it was a nice gesture. It seems like he wants to take care of “his” people. He also seems very gentle towards his girl who we see in many scenes. The fact that the story takes time to humanize Angel has always fascinated me a bit. It creates an interesting dichotomy and depth that you normally don’t see in a movie like Defiance.

The other big difference is the ending of the movie. I’d expect a bloodbath as the gang and Angel finally get smacked down by the neighborhood. In spite of all the horrible things that they have done there isn’t much killing. I don’t think that a single character dies on screen nor is it implied that any of them do. They all get arrested including Angel. In fact, a big deal is made of him walking to the police after Tommy kicks his butt and giving up the fight in front of the gang. They thought he was invincible and seeing him humbled apparently was enough to shatter their confidence. Most of these movies end with the “bad guy” eating a bullet or coming to some other equally deadly end. Defiance gives a more realistic, but just as visceral conclusion. I really enjoy this one and highly recommend that you guys check it out.