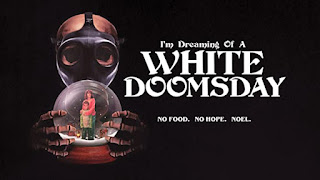 I hadn’t heard about this movie until my friend Donovan picked it for a podcast that we do together. We were interviewing the director, Mike Lombardo, so I figured it was a good bet the movie would come up. With that in mind I went off to Amazon and rented myself a copy. Please note that there are spoilers in my review. I rather enjoyed the movie so I recommend you just go watch I’m Dreaming of a White Doomsday and then come back to see what I have to say about it.

Doomsday has happened and the world is destroyed. We see a mother and her young son in a bomb shelter counting the days until their food runs out. In a series of flashbacks, we see that the husband/father had headed out for more supplies but never returned. That means mom must leave her son to go looking for food. She finds another survivor who is hurt and tells her that something attacked her and her brother. We never see what that is but it does let us know that the world is scary outside of the shelter. To protect her son she steals the injured girl’s food and leaves her to die.

Returning to the bunker we watch as mom realizes that it is hopeless. She finds some cookies in the girl’s bag and makes one last Christmas treat for her son, with a poison chaser. Yeah, she is planning a double suicide! Merry Christmas… Here is where it gets weird. As they are decorating, and she is planning Santa Claus shows up and marches across the wasteland. He has the boys name on his list, yeah this is the “real” Santa, and is hauling a bag of toys. He reaches them and immediately attacks the boy. Santa can’t die as long as a child lives who believes in in and the poor old fella just wants to put himself out of his misery. So yeah, the mom’s plan doesn’t work as Santa chokes the kid out before she can poison him.

This is a depressing and serious movie that I can’t say I enjoyed in the traditional sense of having fun with it. But I very much appreciate how well it is made and that ending has stuck with me for a couple of days. I know that some might find the pacing a little slow but I thought it was fine. The characters are going thru the motions in what seems to be a hopeless situation, so it kind of had to be that way. Plus, this is more of a drama then an action movie so if you are looking for a shoot ‘em up with monsters then this isn’t the flick you should be watching. The twist with Santa is worth the wait. That hooked me as it was unexpected and fun. This is an example of a solid movie that sticks the landing with a crazy fun ending.

The acting is decent especially the young actor who plays the son. Honestly, I’ve seen big budget productions have horrible casting choices when it comes to casting a child. Here the director/writer Lombard got very lucky to find a kid that has talent and can act. He is one of two actors that has to pretty much carry the movie so this could have been a deal breaker. They are helped with well written dialogue that feels natural. Something else that I liked about the writing was the fact that the movie managed to tell us a compelling post-apocalyptic story without having a huge budget. They keep is simple, spending most of the time in the bunker. This controls their locations and scales down the setting to what they could afford. Nothing will kill a movie like being overly ambitious and exceeding your resources. Here Lombardo clearly knew what he had and used it perfectly.

Due to the nature of the story I can’t imagine revisiting this one often. But the fact that it bothered me says that I’m Dreaming of a White Doomsday did the job it intended to do. I don’t think this one is supposed to put you in a holiday mood, but instead is meant to tell you a slightly off kilter and darker story. Mission accomplished. If you have stuck with me this far I’d like to recommend that you check this one out. It is one of the best written and interesting stories that I’ve seen filmed in a long time. I highly recommend it.

Email ThisBlogThis!Share to TwitterShare to FacebookShare to Pinterest
Labels: '00s and beyond. The new stuff, 12 Days of Christmas Horror, Genre - Horror, Movie Review