Jack Frost 2: The Revenge of the Mutant Killer Snowman (2000) 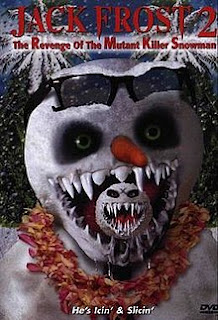 I love these movies and I’m not going to apologize for it. They are silly, over the top, and filled with goofy dialogue as Jack drops one-liners right and left. While this isn’t as good as the original there is still some fun to be had with this worthy sequel. With that said lets get to the story.

It has been a year since Sheriff Tiler and his town were terrorized by the killer snowman Jack. After a recap of what happened and how he was created we are treated to some dummies digging up the containers of antifreeze that contain his remains. Of course, someone dumps hot chocolate in the tank and that brings Jack back to life. Why? Hey man I don’t need to explain the science! He immediately heads off to kill Tiler who happens to be in the tropics celebrating Christmas with his wife and soon to be married friends.

Now you would expect that location to prevent our snowman from being able to continue his homicidal ways, but you would be wrong. Jack heads on down to the islands stopping along the way to murder some lost at sea guys for their carrot. Hey, he needed a nose. When he gets to where he was headed, he takes a few tourists out before changing the climate and making it snow. How does he manage this? Hey man I really don’t need to explain the science. We do find out that Jack was able to track the sheriff because he bled into the antifreeze in the first movie, so they share some genetic material now. That is important because of a banana allergy. 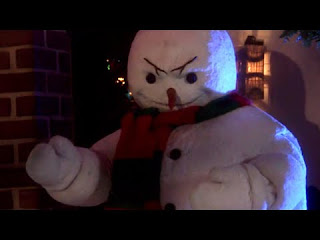 This movie is goofy as hell, and I love it. The dialogue is filled with some very funny lines which I won’t ruin by repeating them in this review. Even after repeated viewings it still is laugh out loud funny. We also have some great setups for the kills including an ice cube gag with a model that was a blast… literally. The plot is quickly paced and wastes no time getting to what we want, a wisecracking killer taking out his victims. The characters aren’t well developed but the cast is solid enough to get the job done and lets be honest this isn’t the sort of flick that leans too heavily into that sort of thing anyway. The late Christopher Allport is back as the Sheriff, and he has some fun chewing up scenery. The rest of the actors aren’t well known but again they do a good job. That said watch for a blink and you’ll miss it appearance from genre favorite Doug Jones.

The kills are more cartoonish and played for laughs. While we get a lot of CGI because of the tongue in cheek nature of the proceedings I was okay with this. The highlights include some icicles bursting thru chests, a woman drowning in a frozen swimming pool, a neck slash, an arm gets torn off with a wicked snowball, and some tongs to the eyes. My favorite is an ice anvil that squishes one woman “Wile E. Coyote” style. In addition to Jack, who is basically just a costumed actor we also get some baby snowball monsters that are puppets. They get to create some havoc before getting whacked by science. Well, I mean someone figures out that they share DNA with the sheriff, so we wrap back around to bananas again!

Jack Frost 2 is played for laughs and does it very well. I’ve always enjoyed this one and try to watch it every couple of years around Christmas. If you haven’t seen this or the first movie I can’t recommend them enough. Trust me this will put you in a very merry mood for this most festive time of year.

Posted by Gutmunchers Lives at 10:55 AM