Just when I think I’ve seen all the sci-fi and horror flicks of the fifties I find another one. This one was brought to my attention by a good friend, and I knew that I had to check it out right away. Terror from the Year 5000 extremely low budget regional movie was shot in Florida and follows the story of a brilliant scientist working on time travel. He has figured out a way to send items into the future and have items sent back. It seems that he has managed to contact those future humans and has started working the machine out.

Sadly, his money man and assistant Victor is very impatient. He decides to crank the machine up and when he does, he brings a future woman back to the present, of course the present for this movie is the fifties. She is horribly mangled by radiation and wants to retrieve him for his uncorrupted genes. But since everyone freaks out when they see her, she kills a nurse and steals her face! Eventually the scientist, his daughter, and a colleague Dr. Hedges all rush to the lab to prevent Victor from going to the future, though their efforts don’t end the way I think they hoped.

Terror from the Year 5000 is a low budget cheesy fifties science fiction/horror flick that tries it’s best. The cast is decent but are saddled with a story that is thin and lacking much action. We get a lot of sneaking around as Hedges tries to figure out why Victor is stalking around the house at night. There is also some swimming, getting of supper, and even a bit of peeping tomfoolery. All of this is fine except I signed up for a monster movie and I’ve not gotten much… no check that any monster at all! 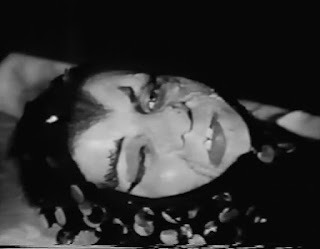 Eventually we do get to see the future lady, but she is kept in the darkness and out of sight for a long time. When we do finally see her, she is wearing the stolen face of the unfortunate nurse. This is late in the story, so it basically escalates quickly and before you know it, we get to see the monster in all its glory. Damn even for the time this is a silly makeup effect. The ending feels rushed and after waiting all that time for something to happen I kind of felt cheated.

I was amused to find out that the creature in this movie is played by an actress named Salome Jens who has had an amazing career with this being her first feature film credit. It seems that she does a lot of voice work, but I recognized her, well her voice anyway, from her role as the lead bad guy changeling on Star Trek Deep Space Nine. Yep, both times I’ve seen her she has been buried under makeup. Though she also played the nurse so when the monster is wearing her face it is her.

Do I like this movie? It has issues and I was disappointed in the lack of monster action. That said I’m a big fan of regional filmmaking and drive-in movies, so this checks a couple of boxes for me. It is also a very short movie clocking in at around sixty-six minutes, so it isn’t a huge investment of time. I guess if you like these old cheesy movies then you will want to check out Terror from the Year 5000, if not then probably not.