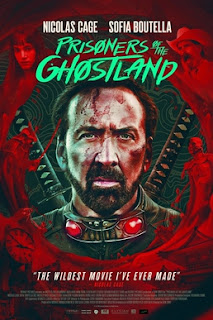 Like him or not Nic Cage has been on a roll lately. He has made some interesting movies, including the great Willy’s Wonderland. When I saw Prisoners of the Ghostland pop up on Shudder I knew that I needed to check it out. I’m glad that I did.

The plot synopsis is going to be confusing. Mostly because the plot is very strange and dare I say quirky? Cage is a bank robber; we know this because we see him and his partner at work. Later thru a series of flashbacks we find out that the robbery went bad, and he left the other robber to be caught by the authorities, though not until after a shootout. This is important later. We also see some women escaping from a prison or brothel, not sure which it is. Then rather abruptly we see one of them wake up in what appears to be a refugee camp. She was having a nightmare about mutants or zombies or something like that.

Have I lost you yet? Some time has passed and Cage’s character has been caught. He is told by the governor, played by genre legend Bill Mosley, that he is the man to recover his granddaughter from the Ghostland. It is a forbidden place that they don’t go but he can. The missing woman is one of those that we saw escape earlier. They give Cage’s character a leather jump suit with bombs attached to it to ensure his compliance and behavior and send him on his way. There are some mutants, one of his testicles and arms get blown up, I think there are ghosts, and in the end a town is saved and lots of bad guys die.

Prisoners of the Ghostland is an odd but enjoyable flick. The setting is confusing as you have what appears to be feudal Japan with the costumes and buildings sitting right alongside with modern guns and cars. There are samurai fighting side by side with cowboys. Mosley’s character is wearing a white suit and cowboy hat, but his right-hand man is a traditional samurai who is feared for his swordplay. It can get a bit confusing at times, but I realized that to enjoy the movie it required turning off the logical part of your brain and just watch what is being tossed on the screen.

Now please don’t misconstrue my previous comment with the idea that the plot is nonsensical. There is an interesting story being told. You have a robber that is redeeming himself thru saving the girl. Though not like you would think. In one of the flashbacks, we see that the girl isn’t the actual granddaughter of the governor but was taken by him when her mother was killed in the shoot out at the bank. So, helping her is setting something right. We also have an odd bit with the melted ghost of his former partner who died when the prison bus had an unfortunate encounter with some toxic waste. There is a lot going on here and trying to figure out how it all connects kept my interest.

Cage is excellent and does a great job carrying the movie. He really has been on a role lately doing movies that fit his odd sensibility as an actor. The guy has certainly cracked the code on the types of characters he should play. That said I almost feel as if Bill Mosley steals the movie as the governor. He basically steals every scene he is in, and I can honestly say this is his best work since The Devil’s Rejects.

There is a lot to like about Prisoners of the Ghostland. The fights are great, the swordplay choreographed very well, the set design is excellent, the lighting adds to the mood and atmosphere. I could go on, but I think I’ve made my point. I can’t recommend this one enough, it is one of the best of the year. Check it out. Again, it is streaming on Shudder as of the writing of this review.