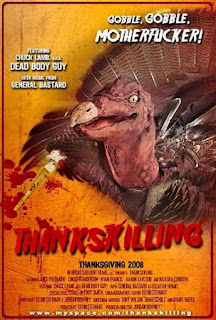 Before I start the review, I want to assure everyone that I’m well aware that this is a goofy movie that some consider bad. Super low budget and cheesy it is about what I’d expect from a killer rubber turkey flick. But for reasons that I’ll explain later this was perfect and made the movie all the much more enjoyable.

The movie starts in olden days with boobs… Pilgrim boobs! There is a lady running from the killer turkey. He catches her and does what a homicidal turkey will do. Then it fast forwards to now. Some students are heading off for Thanksgiving break. They talk some shit, pick up some girls, and are generally annoying. Yeah, I’m rooting for the turkey already. We then see a redneck and his dog. The dog pees on the killer turkey’s grave and it climbs out of the ground to start killing again. Though later they say it was going to happen every five hundred and five years so maybe the pooch just had bad timing.

Back to the kids we see them break down and camp in the woods. The same woods that the killer turkey is stalking. Bad stuff happens when he follows them back to town. Parents are killed, kids are killed, faces are worn, and a lot of bad jokes/one-liners are uttered. In the end do they stop the killer turkey? Well sort of, I mean there is a sequel.

This is the way you should approach an independent movie. While it has some of the common flaws like generic music and some audio issues, they avoid the most common mistakes. Thankskilling clocks in at a tight ninety minutes and none of it is padding. That means they had a solid script and knew how to edit what they shot. Far too many independent flicks show up with half the footage improvised and filled with people just walking around with nothing happening. This movie might be silly, but it is never boring and I appreciated that.

The filmmakers also knew that they didn’t have a cast of professional actors. Instead of trying to hide that they lean into it giving them absurd lines and setting them up in situations that put the bad acting right in your face. This establishes right from the start that they are also in on the joke and not taking them self or the story too seriously. Speaking of that there are some very funny situations and lines in this one. I won’t spoil Turkie’s dialogue, but I will say this is one of those thoroughly quotable flicks that will have you repeating the dialogue to your friends. 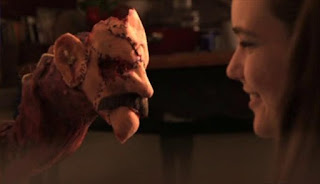 This is a very funny movie. Though I suppose you may need to have an odd sense of humor. For example, if a stuffed baby bunny (it isn’t real!) getting tossed into a campfire doesn’t make you giggle then Turkie “tapping in” after killing a boyfriend isn’t going to be your thing either. I won’t even go into detail on the wearing of the dead father’s face and how none of the characters notice. Personally, I loved the twisted humor and the absurdity of Thankskilling was spot on.

I’m going to recommend this one as I have always loved it and feel like it has held up over several viewings. Heck until I watched Black Friday this year this movie was my must watch Thanksgiving flick. This was much to my lovely and patient wife’s dismay. I hope she digs mutant turkeys from space more. But I’m getting off topic. If you want a few laughs, then this is the movie for you. Maybe next year I’ll cover the sequel.

Posted by Gutmunchers Lives at 2:25 PM