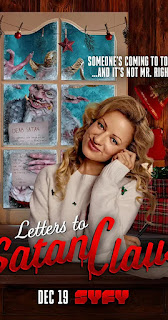 The movie opens years ago when we see a spoiled little brat angry that her out of work parents can’t by her the Darby dream car that she wants for Christmas. Because of that she writes an angry letter to Santa telling him all she wants for Christmas is for her parents to be gone. Later in flashbacks we see her and her younger sister on Christmas morning opening presents… each one containing a piece of her murdered and chopped up parents. Feeling festive yet?

The movie jumps twenty-two years later, and we see that the litter girl, Holly Frost (yes, all the names are very festive) is an investigative reporter. Though her dream is to get the anchor’s seat and that chance has finally come. Though she needs to be more approachable, so her boss sends her to Ornament… yep that is the name of the town, to cover their yearly Christmas festival. This also happens to be her hometown that she has been avoiding since high school.

Holly comes home, drinks a lot, and is totally snarky. She also finds the letter she wrote as a little girl and realized that she misspelled Santa as Satan. Again, being sarcastic and a scrooge she sends Satan another nasty letter. He shows up again and starts killing everyone. Initially no one believes Holly but eventually enough people disappear, and bodies drop that they catch on to what is happening. She must find her holiday spirit so that she can lead the rest of the town in a battle to send Satan on his way! This is a weird movie.

I don’t know how many of you out there either watch those Hallmark Christmas movies or have a spouse that does, but this is a fantastic parody of those. Let’s look at some of the tropes of those and see how they twist them in Letters to Satan Claus. Obviously, we have the fish out of water successful big city girl come back home only to be charmed by the simple ways of small-town America and falling in love. Here she has to so that Satan can be banished, and the killings stopped, but it is pretty much the same thing. There is also a handsome man who lost his wife and has a young precious daughter. Here the wife was killed by a falling hot air balloon and the daughter is a creepy adult child that well… just has to be seen to be believed. In the end Holly rejects the big job to return to her small-town home to be with the man she loves… though that doesn’t turn out as you would expect. We even get a proposal from a secret prince from Eastern Western Europe! 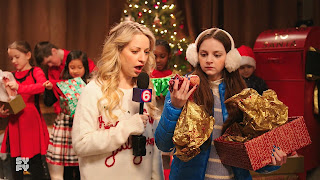 Now if that doesn’t appeal to you there are some horror goodness that might. We get some fun kills like Aunt Becky the baker getting tossed into her oven, cookies that bleed and ask why you are killing them, and even death by obnoxious Christmas music! Though I think the biggest thing that I learned is if a snowman suddenly comes to life and offers to show you what can be used for his eyes you might want to step back a few paces. Just to be clear this isn’t an overly gory movie but the kills are creative and most importantly festive. The look of Satan Claus is decent. They created an actual appliance and have an actor in it which is always what I prefer. Here he has some snappy one liners and cackles in a silly but creepy way. To sum it up I liked the kills and the creature.

I suppose if you haven’t been forced to watch Hallmark Christmas in July, and yes that is a real thing, then you might not get some of the jokes in Letters to Satan Claus. But there are still others that are more obvious that will probably put a smile on your face. To catch them you must be paying attention to the dialogue because they sneak some good ones in under your nose. This movie is very well written, acted, and directed. It will be on my yearly watch for the Holidays list from this point forward. I highly recommend Letters to Satan Claus.