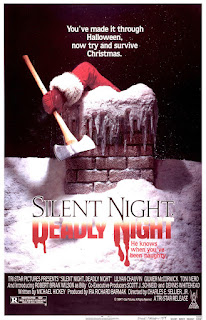 I suppose it was about time for me to get to this most infamous of Christmas horror flicks. Though if I’m going to be honest, and I always am, the controversy is sort of overblown. Other than the Santa outfit this movie isn’t terribly shocking for a slasher flick and was never intended for the kids that still believe in Santa to see anyway. But I’m getting ahead of myself.

Things kick off with young Billy going to see his grandfather, who when no one is looking scares the hell out of him. On the way home he then sees his parents murdered by a criminal dressed as Santa. Now an orphan he is raised in an orphanage run by a nun with some odd issues at how to properly raise children his issues become worse. Between the ideas of punishment from the nun and the idea that Santa has a naughty list, things go rather poorly when he is asked to dress as jolly old Saint Nick by his employer. Determined to do his best and believing it is now his job to punish the naughty he goes on a killing spree.

As I’ve already stated this movie is rather infamous for the reaction it got when first released. I suppose that parents didn’t like a slasher flick about Santa killing people coming out right before Christmas. Who knew that might be an issue? Though again this was never intended for the younger crowd there were some unfortunate advertising mistakes like running ads while the kiddos were watch the television. In a way the controversy and subsequent pulling of the movie from theaters was probably the best thing that could have happened to Silent Night Deadly Night. Don’t get me wrong the movie is a solid slasher flick, but this pushed it into must watch territory.

The story is paced decently, though the Billy growing up in the orphanage stuff isn’t terribly interesting to me. Though once he dons the red suit and starts growling “Naughty” at his victims it picks up. What is a nice touch is that we can sort of understand why Billy does what he does. The guy is messed up and is only doing what he thinks he is supposed to do. For a slasher movie to make us feel sympathetic to the killer is a nice twist. Also, the fact that the plot basically follows him as the main character and not a final girl was a bit different from the formula. I like it when filmmakers subvert my expectations and/or put their own spin on things.

The gore is plentiful and of course there is some nudity. The lovely Linnea Quigley provides that and is done away with in one of the most creative and festive kills you will ever see on screen! Other kills include some work being done with a hammer and axe. There is a lot of blood and fun, though this time I did notice that more of it happens off camera and implied then I remember from past viewings. That said it is still a good time and delivers what I expected with a solid eight kills and one accidental death.

If you are looking for a Christmas themed horror movie then this one is an obvious choice, though I’d still pick Bob Clark’s Black Christmas before it. But then that is a genuine classic, so this isn’t a shot at Silent Night Deadly Night. If you are a horror fan and haven’t seen this yet you really should.