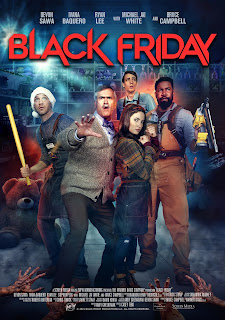 Okay I was all over this movie. It has Bruce Campbell, Michael Jai White, and Devon Sawa in it. Those are some bad ass genre actors right there. Still, I was worried that this would be a lame flick that basically has glorified cameos from the three to suck us in. I can now confirm that isn’t the case at all.

Sawa is Ken, a divorced father of two girls who is forced to work his crappy retail job at a toy store on Black Friday. On his way to the store, he picks up his teenage co-worker Chris. They arrive and we are introduced to other characters such as bad ass maintenance man Archie, White’s character, and Ken’s work “girlfriend” Marnie. We also meet the store manager played by the always awesome Bruce Campbell. There are also some hints that meteor storms have been hitting and thru a precredit scene we see that they are not just space rocks.

The doors are opened, and everything goes to hell. Some of the customers are infected by the stuff that has fallen from the sky. This turns them into continually mutating monsters that seem intent on infecting as many others as possible. The store is a perfect place for them to gather and eventually they start to merge into a huge Kaiju type creature. While this is happening, our cast is trying to survive, dropping some excellent one-liners, and generally screaming while they run around.

This movie is a blast. First up all the big names have larger roles including Sawa who is the star of the movie. Campbell is excellent as the store manager being a bit cowardly at times and generally playing everything for laughs. The filmmakers knew who they had cast and let him do his thing. Michael Jai White is a badass and does most of the early butt kicking. He also gets to drop a line he seems to use quite a bit. I won’t ruin it here but if you know his movies you will see it. Devon Sawa is the down on his luck divorced dad and is quite good. He gets a lot of screen time and reminds the audience that he is one hell of an actor. The other performances are also spot on and fit perfectly for the material. Bravo to both the cast but also the casting director. They nailed it.

The story itself is paced well apart from an obligatory “getting to know each other” bit in the middle. But the initial outbreak as well as the chaos that follows is a blast. The movie doesn’t try to explain everything right away and even leaves some things unresolved at the end. Getting some resolution for the characters without overexplaining is my favorite way for horror movies to wrap up. That also brings me to the fact that this is an excellent horror comedy. We get monsters that are cool, more on that later, as well as a lot of funny stuff. That isn’t easy to do, but they managed it.

The special effects are great. The infected go thru different mutations as they approach the final form or at least the last one we see. Starting off as pus filled bubbly figures, they end up going full on chicken monster before melding into the giant monsters that go stomping at the end. The kills are decent but not over explicit. There is a fun gag with a neck getting a bottle thru it, but most of the mayhem is off screen. Again, where they excel is the creature design, so I was good with it.

This is my new go to movie for Thanksgiving… sorry Thankskilling. The cast is great, the monsters are fun, and overall Black Friday is a blast. If you haven’t checked it out yet do so right away. You won’t be disappointed.

Posted by Gutmunchers Lives at 2:01 PM