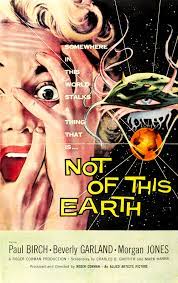 It has been far too long since I’ve gotten my Roger Corman on, so I figured that checking out Not of this Earth was a good place to jump back in. Not only does Corman direct it, but his regulars Jonathan Haze and Dick Miller show up as well! I’m predicting a good time is about to be had.

The movie kicks off with a teenage couple sitting in a car making a little bit with the smooching. She calls it a night and heads off to her front door while he drives away. But before the girl can make it home, she is stopped by a weird dude who eye zaps her and then steals her blood with his briefcase. We later find out when he goes to the hospital for a transfusion that his name is Mr. Johnson, and he can put people under his command with his soulless monster eyes. Sometimes he kills them, and other times just controls them.

What is up with Johnson? Well, it turns out that he is an alien come to Earth to see if our primitive blood will work as a source to save his dying race. They had a nuclear war and now they need our blood! It is up to his hired nurse, he needs nightly transfusions to live you see, and her cop boyfriend to save the day. They do but sadly his assistant, Jonathan Haze’s character and a traveling vacuum salesman, Dick Miller, end up dead! Seriously Miller is awesome as the super hip huckster.

Roger Corman had a formula early in his career. He made quick, cheap, and entertaining movies that got the job done. Clocking in a barely over an hour Not of this Earth is a prime example of how it worked. There is a simple concept that could be shot on generic sets without a ton of special effects work. Basically, the only alien bit is his eyes and most of the movie Mr. Johnson is wearing dark glasses. This is simple and genius. The story is very tight with no wasted scenes and again the runtime is on the short side, which means it never gets boring. This is admittedly a story that probably wouldn’t hold up if it stuck around much longer than it does.

Another thing that Corman did was get great actors. Here he cast the lovely Beverly Garland as the nurse and veteran actor Paul Birch as Mr. Johnson the alien. They take what are admittedly absurd situations and play the hell out of them. To pad things out he lets regulars Jonathan Haze (Little Shop of Horrors) chew some scenery up being hip daddio as right-hand man Jeremy. Dick Miller gets a much smaller part but is very memorable in his role as well. These scenes are clearly there to pad things about a bit, but they are so good at it that the movie doesn’t suffer. Roger Corman was a genius at identifying talent and letting them be creative.

Not sure what else I can say. This isn’t a classic by any stretch. It isn’t even one of Corman’s best movies. But it’s fun and not a bad way to kill an hour. I guess that the only thing that was a bit of a bummer is that Not of this Earth is lacking the iconic monster that a lot of his movies featured. Still, I dig it and can recommend this one.

Posted by Gutmunchers Lives at 10:44 AM