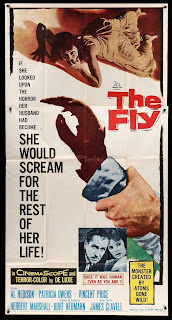 It occurred to me the other day that I had never covered the original Fly for the website. That seems like an oversight, but I just always assumed that everyone had seen this and what could I add to the conversation. Though recently I was chatting with some younger horror fans and was shocked that they hadn’t seen this one, along with some other must-watch movies. You may be seeing some movies here on Fab Fifties that you all know and love but please understand I’m trying to educate the youth!

The movie kicks off with some horrible stuff at a factory. A man’s head and arm has been crushed in a large hydraulic press. They make a big deal that it was set to zero, which means metal on metal with no space. I’m guessing that made a huge mess! It quickly becomes obvious that Helene has killed her husband Andre… because she calls his brother Francois to confess! She won’t tell anyone why she did it so they authorities consider her insane. But why would this otherwise lovely lady go homicidal?

We find out in a series of flashbacks that Andre was a brilliant scientist who has invented a teleporter that can break down solid items and deliver them almost instantaneously to another place. Eventually he decides to test it on himself and a fly sneaks into the chamber with him. The machine materializes him with the fly’s head and arm and the fly with his head and arm! If that weren’t bad enough the longer it goes the more fly like he becomes and in a fun twist the more human, the fly becomes. But will anyone believe Helene’s story before she is hauled off and charged with murder? Well yeah of course.

This is one of the best fifties’ creature features if not one of the best of all time. The story is unique, at least for the time, in that it tells the story out of order. We see what happens to Andre before we see how he came to that end. This could have easily backfired as the movie basically spoils itself. But the writing is superb and knowing what happens makes you cringe during the happy scenes with his family. The movie also builds up some suspense with the search for the fly with human bits. This is the only way that they can save Helene and they wait until the last minute, which is fun. And of course, that last bit is one of the most famous of all scenes from a fifties sci-fi/horror flick. The little fly with Andre’s head screaming ‘Help me… help me’ as the spider comes for it.

Ironically, no one other than Andre dies but the horror comes from the audience liking the characters and being disturbed by what happens to them. That is a neat trick and not something you see very much in horror since the days of Frankenstein. Yeah, I know the little girl by the lake and Fritz… but Fritz had it coming!

The cast is great with David Hedison who starred in so many great movies and television shows that I won’t even attempt to list them here. Seriously hit up IMDB and check out his resume. This guy had some acting chops and is wonderful as the doomed Francois. Child actor Charles Herbert plays Andre’s and Helene’s fly catching son. Fans might recognize him from William Castle’s 13 Ghosts. And of course, we have the legendary Vincent Price as Francois. He is incredibly good as the brother who simply can’t believe that his sister-in-law could have committed such a crime. There is a lot of talent on this cast, and it makes what could have been a silly premise play much more seriously on screen.

We don’t get to see much of the fly makeup, but what we do see is killer. The head has several moving parts and the actor helps to sell the gag by jerky insect like movements. While they keep it mostly under the hood the reveal and couple of minutes when we can see it makes this one of the most memorable monsters of the decade. They also chose to shoot this movie in color which gives it an added oomph as the creature seems all that much more horrific.

I could keep going but if you haven’t seen the Fly and aren’t convinced by what I’ve already had to say about the movie then I can’t help you. This is a genuine classic, has one of the best creature reveals ever, and stars an icon of the horror genre. This is a must watch for all fans!

Posted by Gutmunchers Lives at 9:35 AM