note: I originally wrote this for Grindhouse Purgatory. I'm posting it here as part of the Throwback Thursdays that I occasionally do. This is part movie review, part Blu-ray review, and part musings about my love for this movie and the late Sid Haig. - John

The Blu-Ray Report: Beyond Atlantis

When Pete had mentioned wanting to do a tribute issue to the late Sid Haig, I immediately started thinking about how I could tie him into my usual article here at Grindhouse Purgatory. He appeared in so many great movies over the years that I was sure there was one with a recent Blu-Ray release that I could cover. After a few minutes it hit me that I had the new release of the drive-in classic Beyond Atlantis from the fine folks at VCI sitting in my to watch pile. A movie that I’ve always been a huge fan of. This might be the easiest decision I’ve had to make when it comes to what to cover. 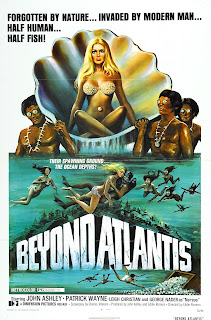 In case you haven’t seen this movie, I’ll give you a brief recap of the plot. Things kick off with a fisherman, portrayed by Filipino legend Vic Diaz, dropping off some supplies to a beautiful blonde woman. She pays for them with pearls and the man leaves. As soon as he is out of sight some strange fish eyed natives come from the woods and she gives them orders while disrobing. Okay movie you have my attention.

The action then moves to the city where the same fisherman is selling the pearls to East Eddie, played by Haig. Immediately realizing the value and rarity of the pearls, he attempts to pump the man for information, but the fisherman gives nothing but where he lives. This he will regret later. Later Eddie recruits a couple other Americans, Vic and Logan, to help him locate the source of the pearls. Together they make plans for their expedition and along the way are forced to bring along a woman named Kathy. She overheard them talking and as a scientist trying to make her mark realizes the pearls they have look much like some from an ancient stone mask she has been studying. Making some connections she threatens her own expedition including getting the authorities involved if she can’t join theirs. Along with some of Eddie’s men and the crew from Vic’s boat they head off.

After a quick stop at the fisherman’s village, where they rough him up for the location of the mysterious island, they arrive at their destination. They find some abandoned huts, but eventually do meet up with the natives. You have the odd-looking locals, those fish eyed natives mentioned earlier, as well as the beautiful woman and her father. We find out her name is Syrene and her father is Nereus. I’m jumping ahead a bit here but since it is in the title it should come as no surprise that they are descendants of refugees from the lost city of Atlantis. The timing of their arrival couldn’t be better since it is time for Syrene to mate with an outsider. Once that is accomplished then they can be committed to the sea… which is a nice way of saying they are going to murder the hell out of them! Some shenanigans go down with rejection, jealousy, greed, and a couple other sins before we get the explosive and somewhat odd ending.

Let me chat about my personal connection with Beyond Atlantis before I get into the general discussion of the qualities of the movie. I’ve mentioned more than once in these pages that I grew up with a lot of these films. This isn’t one of them. My first exposure to Beyond Atlantis was at Cinema Wasteland, a convention that I’m sure many of you readers are familiar with. They were showing the movie on 16mm film one Saturday night and I plopped down to watch it and was sucked right in. The next morning, I went looking in the dealer’s room for a copy of the movie to take home with me. The only thing available at the time was a bootleg that I think was sourced from another 16mm print. I can say that because I went right home and watched it again noticing different defects from what I had seen the night before. For years this was the best version that I could find, but I’ll save that discussion for later.

Now to the movie itself. The plot is tight and quickly introduces our characters before setting them off towards the island. It doesn’t feel rushed at all, but you still get a good idea who Vic, East Eddie, and Logan are in just a couple scenes. This includes some killer dialogue from Haig’s Eddie that lets you know where he is coming from right away. The line to one of his working girls, “You go pop for papa” sums his character up nicely. Toss in a fun bit of dialogue at the bar with Logan and Vic to cement who is playing what role in the rest of the story. For the most part the pacing of the story is perfect. Though as much as I love Beyond Atlantis, I will admit that some of the underwater scenes do drag, but the stuff surrounding them more than makes up for it. No matter how many times I watch it I’m never bored.

The cast for the movie is very impressive and includes John Ashley who was a frequent collaborator with director Eddie Romero and helped produce many of his movies in the seventies. I thought it was fun to see Ashely get a chance to play a heel here as he was normally cast as the romantic lead/hero. His character Logan is a greedy, womanizing, compulsive gambler that is always looking for an angle to score big. Patrick Wayne, yes John Wayne’s son is in this, plays the stoic good guy Vic. This role reminded me of a lot of his father’s western characters as he is fairly quiet. Wayne is decent but honestly is by far the least interesting of our leads. Vic Diaz has a very small part in the movie, but it is memorable. The guy is a legend in Filipino entertainment and pops up in a lot of the productions made for the U.S. market.

Finally, we come to Sid Haig’s performance. The guy was awesome in just about everything that he appeared in so there were a lot of movies to choose from. As much as I enjoy his collaborations with Jack Hill and his renaissance as Captain Spaulding later on this is my favorite performance/movie from his legendary career. From the moment he is on screen Haig owns every scene he appears in. Not only is he physically imposing but his quick dialogue delivery blows everyone else away. I have a feeling that director Eddie Romero knew this as he basically gives him all the best lines. This is the movie that made me appreciate who Haig was as a performer and in my humble opinion also laid the groundwork for what was to come. I think that East Eddie has more than a little bit of Captain Spaulding in him.

Since I’m reviewing the Blu-Ray release and not just the movie I suppose I should talk about the special features. This is easy because there isn’t much offered on this release from VCI. You do get a fifteen-minute-long short titled Remembering John Ashley which I was very interested in. The guy did a lot of work and not much is out there on his career but sadly this didn’t meet my expectations. If you have seen the excellent Machete Maidens documentary, then you will recognize most of this material as being recycled from it. There are interviews with Sid Haig, Patrick Wayne, and Eddie Romero to name just a few. But sadly, they couldn’t even give Ashley his fifteen minutes as halfway thru it becomes all about working with Eddie Romero. I was bummed by this. The rest of the features are the typical inclusion of television spots, theatrical trailer, and photo gallery. Not much to it at all. Though I’ve saved the best for last.

Remember way back when I was yammering on about my personal experiences with Beyond Atlantis and watching it for the first time at Cinema Wasteland and then searching out a copy? From that point until this Blu-Ray the only I could ever find were from 16mm prints and even worse the occasional VHS rip. The latter being inevitably dreadful. This time around I was watching a digital transfer from a 35mm negative and oh my God it was like watching the movie for the first time. The picture and sound are amazing and genuinely blew me away. I’ve revisited it twice in the week since my first viewing and I still shocked by how good it is.

I’m dangerously close to totally nerding out here so I’ll stop. Clearly, I love Beyond Atlantis and this release made me very happy. For many years I’ve been telling anyone who would listen that this was my favorite drive-in movie. It also has one of Sid Haig’s best performances and just got a beautiful new release. Does it get any better than this? I don’t think so and highly recommend that anyone reading this go out and get themselves a copy.

This brings things to a close. As always you can email me at gutmunchers@gmail.com with any questions or comments on this latest installment of the Blu-Ray Report. Agree or disagree I’d love to hear from you. Though if you disagree on this one you had better bring your “A” game cause I’m ready! I’ll see you all again here on the pages of this fine publication in six months to either steer you towards or away from the latest release. And as always, I can’t thank 42nd Street Pete enough for the chance to participate in such a great project.

Posted by Gutmunchers Lives at 9:30 AM