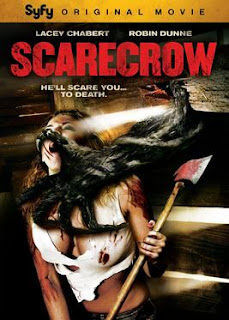 These made for television Syfy channel originals were a mixed bag. Many times, they were just awful, but occasionally they would strike gold and make a great movie. Though it felt like that happened on accident. So many terrible shark movies… so many. Scarecrow is one of those fun flicks that had me tuning back every Saturday night to see what they had coming up next.

Students on detention are being sent to clean up a local farm where the community is planning on having their annual scarecrow festival. We have the usual suspects including the popular girl, the nerdy guy, the outsider, and of course the bad boy. Their teacher piles them onto a bus and takes them out to the house where they are met by Kristen, played by a pre-Hallmark Lacey Chabert. Seriously she is in like every generic Hallmark channel movie my wife watches. Anyway, she and the teacher used to be a couple. This is further complicated when another local man, Eddie, shows up. He was also a previous boyfriend, so the plot thickens.

Luckily, all this character drama goes away quickly when the scarecrow, which was released earlier by some teenage shenanigans, starts to kill off the cast. The bodies keep dropping as they try to make their escape. Cell phones don’t work, cars won’t start, and the keys to the bus are missing. That means they spend part of the time holding up in the farmhouse under siege, and the rest of the time on the run thru the woods with the monster in pursuit. Again, they keep getting picked off until the final survivor does battle with the monster sending it back to sleep.

Make no mistake Scarecrow follows the creature feature formula and doesn’t break any new ground. Introduce characters, isolate them, kill a few off, then tease them with rescue only to squash their hopes. We have seen this all before, but where I think the movie excels is in the execution. The cast is very good, and the writing is decent. This makes for some decent pacing as well as characters you can root for. Sure, you know who is likely to die, but it’s still sad. There is something easy about a movie like Scarecrow. Consider it cinematic comfort food, like meatloaf with mashed potatoes. I like a nice meatloaf and I liked this movie. 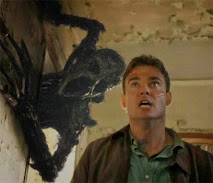 Another positive is the creature design. It is all CGI, which with Syfy channel flicks can be dangerous ground. But here the monster looks decent and moves around the screen in creepy ways. It almost flows around the set as it hides on ceilings and under the floor before popping in to snatch a victim. Speaking of victims, the movie has a respectable twelve kills. Many of them are offscreen with the results shown later with easier to do static dead bodies. But we do get a blade thru a girl, a farmer killed from the feet up, a shotgun, and the best is someone getting torn open from the inside complete with chest exploding. For a lower budgeted made for television production that is some good stuff.

I dig Scarecrow a lot more than I thought I was going to. It is a solid flick with some good wholesome downhome horror fun. This made me sad that Syfy has bailed on doing these choosing to show Harry Potter for the millionth time. Regardless of that I highly recommend checking out this one.

Posted by Gutmunchers Lives at 7:37 PM

Email ThisBlogThis!Share to TwitterShare to FacebookShare to Pinterest
Labels: '00s and beyond. The new stuff, Genre - Horror, Genre - Made for T.V., Movie Review