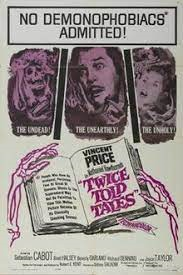 I’m a huge fan of Vincent Price and I love the collaborations he did in the sixties with Roger Corman. They were very popular which is why a different company and director, Sidney Salkow, recruited him to be in this anthology of creepy stories. How did it turn out?

Well honestly not very good. We get three stories in this one based on stories from Nathaniel Hawthorne. The first has a doctor and his friend toasting each other in their old age. Heidegger, played by Sebastian Cabot, pines after his fiancé who died on the eve of their wedding many years before. Thru a series of odd occurrences their attention is drawn to her tomb where they find that she hasn’t decayed at all over the decades! This is attributed to some water that has been dripping on her coffin. They figure out this water also makes them young again and brings her back to life. Secrets are revealed that leads to a predictable, “be careful what you wish for” ending.

The highlight of this segment are the performances of Price and Cabot. They are pretty good together. Though I don’t think Cabot had the jealous revenge seeking spurned fiancé performance in him. I just did buy it. The story is tight but is heavy on the melodrama and at times was a struggle to get thru. Though at least Price is in a lot of this one and that is a bonus.

The second story unfortunately isn’t as lucky. Here we have a man who sees a beautiful woman in the garden below his balcony. The garden is locked so he can’t get in and she apparently can’t get out. Though the two do strike up a conversation that leads to them falling in love. The young man refuses to give up on her and sneaks into the garden. Here we find out that her father, played by Price, used his skill as a chemist to make her very touch poisonous. If she touches you then you die. After much hand wringing and professing of love we get a very odd Romeo and Juliet type ending.

While we do get to see a young Brett Halsey, whom most of you here will recognize from his later collaborations with Fulci, we don’t see enough of Price. Without him and his back and forth with the rest of the cast I found this one to be drawn out and tedious. I could see what was coming and couldn’t wait for it to be over. This was my least favorite of the three.

The third and final segment is by far the best. Price plays a man returned to his ancestral home after squandering his inheritance. He is determined to find the legendary treasure hidden there so he can get back on his feet. With him is his wife, played by the very lovely Beverly Garland, whom he doesn’t treat all that well. This is especially so after she seems to have some strange connection to the ancestor and neighbor from a rival family. Oh yeah and there is a family curse connected to both families that ends up playing an important part to the story.

Here we get to see vintage Vincent Price. He gets to chew up the scenery as the scheming husband looking for a quick payday. He doesn’t care what he has to do or who gets hurt as long as he gets his money. His dismissal of the curse and family history is done so with an arrogance that only he can make frustrating and charming at the same time. Plus, we get a neat haunted house, unrequited love, hidden treasure, curses, and even an evil sister. They packed a lot of good stuff in here. I only wish that they had made the same effort on the other two.

Despite how much I liked the last segment I can’t recommend sitting thru a two-hour long movie just for it. There are much better examples of Vincent Price being evil and creepy then Twice-Told Tales. Still if you must watch it stick with it until the end, because there is a decent payoff. Until next time my friends.