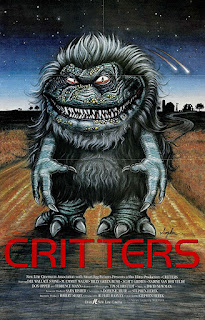 Space… where they have prisons on asteroids. The movie opens with a prisoner transfer that goes wrong when some fuzzy little bastards make a break for it and steal a ship. The warden sends some shapeshifting bounty hunters after them. Seems they are eating and killing machines that need to be stopped before they get out of hand. Of course, they head to Earth and land near a small town in Kansas called Grover’s Bend with the hunters in pursuit. This brings the aliens into contact with the Brown family as they lay siege to the house while the bounty hunters terrorize the town while looking for them. People get eaten, houses get exploded then unexploded, and funny stuff happens. All in all, a good time is had.

I’ve always loved this movie. The most obvious reason is the work from the Chiodo brothers in designing and bringing the Critters to life. If you have read my reviews for the Ghoulies movies you know I love me some puppets. Here we get a ton of puppet special effects work that not only bring them to life but give them personality as well. We actually have the puppets cracking wise and being funny on screen. There is a funny bit with an E.T. toy and another time when one drops an “F” bomb after encountering the business end of a shotgun! Is it any surprise that the brothers went on to make the classic Killer Klowns from Outer Space? These guys are awesome, and it shows here in Critters.

This is a family movie so there aren’t that many kills. We do get to see some Critters explode and another set on fire. But mayhem to the humans tends to happen off-screen. Though we do get some fingers bitten off and several shoulders chewed up. Watch for a very young Billy Zane as he gets the best death scene in the movie. The most elaborate effects work is saved for the initial transformation when the bounty hunter takes the appearance of Johnny Steele. 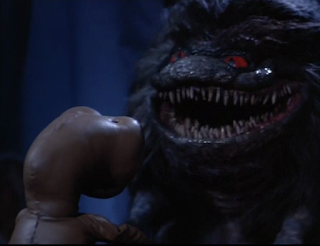 The cast is filled with familiar faces and one that would be a staple in newer horror movies twenty years later. The most obvious is Dee Wallace playing the matriarch to the Brown clan. She is the go-to Mom for horror movies for a reason, because she is good in these roles. M. Emmet Walsh is the sheriff Harv and is solid as always. Star Trek Voyager fans will recognize Ethan Phillips as the doomed deputy Barnes. And again we get a very young Billy Zane playing the doomed city boy come courting the daughter of the Brown family. Finally, Lin Shaye who seems to be in about every new horror movie has a small part as the dispatcher in the sheriff’s office.

Damn it they killed Billy Zane! The dude survives the Titanic and he gets offed by some fuzzy alien bastards… Seriously I love this movie. Because of the PG rating this was acceptable viewing in my house while I was growing up, so I watched it a lot. Even afterwards I still keep the Critter movies in heavy rotation. I guarantee you one of them gets played every few months at Casa de Crappy Movie Reviews. I’d like to think that most of you have seen these movies but if you haven’t, I’d recommend this one. The sequels are fun but not as good as the movie that spawned them all.