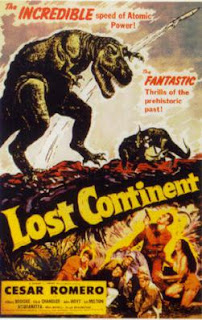 I had never seen this one before and after watching it I can see why. The movie kicks off with a rocket experiment being conducted. They lose control of it, and it crashes somewhere in the Pacific with an experimental nuclear engine that they must recover. So, a group of scientists and some air force personal hop on an airplane and head out. They encounter some strange phenomenon, which they later blame on radiation, that causes the plane to crash. The rest of the movie is them walking and climbing up a mountain to grab the engine all while avoiding the dinosaurs that live on the peak. Then they walk back down.

I jumped into this one hoping that this could be another fun stop motion dinosaur flick like The Land Unknown which I will eventually review here at the site. But instead of that what we get is a movie that had potential but clearly not enough of a script. Things start off a bit slow after the opening scenes of the crash. We are introduced to our three air force guys, one of which is interrupted on a date. I thought she was going to be a love interest, but we never see her again. Instead, what we do get are lots of scenes of them walking, climbing, walking, and climbing again. There is a stretch of the movie where that is all we see for over twenty minutes! When I say Lost Continent is slow, I mean painfully so.

This is hugely disappointing since they had assembled a decent cast. The always great Caesar Romero is our lead and is supported by other familiar faces such as Hugh Beaumont, John Hoyt, and Whit Bissel. While these names might be familiar but if you have watched genre flicks at all you will recognize them. Especially Whit Bissel who had supporting roles in gems like Target Earth and I was a Teenage Werewolf. Both of which I have covered for the site. Sadly, this movie isn’t nearly as good as either of those.

The special effects work is appropriately cheesy and fun. They borrow the rocket footage from another movie, but the dinosaurs are all original. We get one short lizard standing in for prehistoric monster gag but most of the dino action is done with stop motion effects. While they aren’t Harryhausen level good I thought they were fun. But then I’m partial to stuff like this and enjoyed seeing them fight it out on screen. Sadly, we don’t get a single composite shot with the actors being menaced by the monsters. Not even some rear projection gags. I don’t ask much from my monster movies, but this is a deal breaker.

Sadly, Lost Continent is just a bad movie. A decent cast and some fun stop motion can’t overcome the terrible pacing and a lack of story. This could have easily been a fun little flick had they put more effort into making sure they had a script before shooting it. I’m going to recommend passing on this one.

Posted by Gutmunchers Lives at 11:01 AM