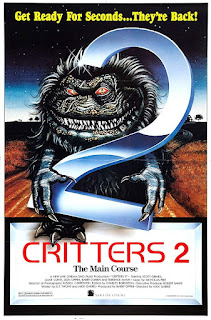 My dive into the Critters franchise continues with this second installment. This sequel picks up a couple of years later with the son, Brad, of the Brown family returning to Grover’s Bend to visit his grandmother for Easter. It seems that after the events of the first movie the family moved away to Kansas City. Mostly because the rest of the town didn’t believe that the little monsters from space were real. This is also why sheriff Harv was voted out in the election following the first invasion. That night didn’t go well for anyone involved!

If you have seen the first movie you know that while they killed the Critters, there were a batch of eggs left behind. Well these finally hatch right before Easter when Brad is back in town. Lucky for him they were detected so the alien bounty hunters from the first movie also return with the town drunk Charlie coming back with them. This leads to a big battle, a lot more townsfolk dying, and the giant Critter ball of death rolling around. Basically, we get a bunch more mayhem and fun with the hungry homicidal puppets!

Looking at the horror movies of the eighties I’d say that Critters The Main Course might be one of the best sequels made for any franchise. Maybe that is crazy, but I honestly love this flick. The pacing is brisk and there isn’t a wasted scene in the movie. Everything is either there to move the story along or to toss a joke at the audience. The Main Course knows what the audience expects, funny alien puppets and some mayhem. It delivers on both. It wasn’t until I watched the movie for this review that I noticed the movie was directed by Mick Garris. This appears to be his first shot at helming a movie and he nailed it. 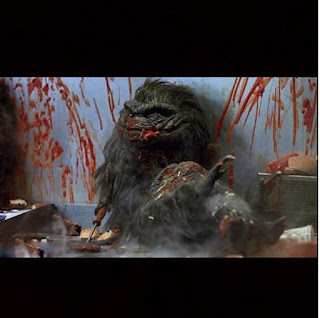 The cast is missing Dee Wallace, always a bummer not to see her, but it brings enough of the original cast back to connect the two stories together. Scott Grimes, who plays Brad, is one of those rare child actors that never seemed to go thru an awkward phase. He plays the character here with the same charisma and energy that he did in the original movie a couple years earlier. Also returning are Don Opper as Charlie and Terrence Mann as the bounty hunter Ug. They are both really good in the roles again. Plus, they added Eddie Deezen in a small supporting role which is always awesome. You might be saying to yourself, “who is Eddie Deezen?” Trust me you know who he is!

There is a bit more blood in this than the first one but keep your expectations low. The critters do eat some folks and there are a few skeletons and eyeballs popping out, but this isn’t a gore fest. The critters also aren’t as good as the first, but we get a lot more of them. As most of the frequent readers probably know by now, I’m a big fan of puppetry being used to bring little monsters to the screen. Critters The Main Course brings the goods and gave me exactly what I expected and wanted.

Probably not a surprise that I’m going to recommend this one. I love Critters The Main Course and go back to watch it every couple of years. It always puts a smile on my face. Find yourself a copy and check it out.