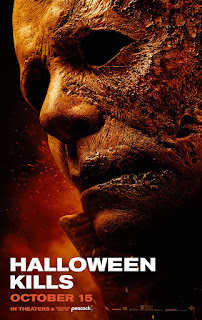 This movie picks up right at the end of Halloween 2018 with Laurie and her family in the back of the pickup truck headed to the hospital. As they go they see the fire trucks headed to put the fire out at her house. If you remember they had trapped Michael in the basement to let him burn. Well, he gets out and after slaughtering the firemen he heads off to town to start tearing thru the locals.

While this happens, we also get to see some recurring characters like Sheriff Brackett, Tommy Doyle, Lindsey, and even Loomis’ nurse. When everyone realizes that Michael is back, they form a mob and go after him. Though it doesn’t end well as when they finally catch up to him, he is a lot harder to kill then they realize. We also get call backs to characters from the 2018 movie with the asshole boyfriend and his dad. If that isn’t enough for you, we also get some worldbuilding as they fill in the gaps as to what happened that night. Remember we must ignore all the sequels between the original and the beginning of this trilogy.

I liked this movie. Not as much as the one that preceded it, but Halloween Kills is decent. The story picks up smoothly from the last movie and is evenly paced from start to finish. The call backs to characters from the original Halloween is cool as we get to see some familiar faces reprise their roles. Seeing Charles Ciphers as Brackett and Kyle Richards as Lindsey was very cool. Also, Anthony Michael Hall taking over as Tommy Doyle was a good bit of casting. The writers do a good job of showing how traumatized Haddonfield has become from the murders forty years ago as well as Michael returning to town. All in all, I was satisfied with what I got.

Though that doesn’t mean I don’t have some issues. My biggest problem with Halloween Kills is that we don’t get enough Jamie Lee Curtis. She spends most of the movie in the hospital recovering from her wounds along with Hawkins, who survived being stabbed and run over! She never shares a scene with Michael and that angry grandma vibe from the previous movie is totally lost. That was one of my favorite things about that movie and I feel like she was wasted in this movie. There are also a couple “what the hell” moments in the movie, with the most egregious one being Michael showing up at the end to kill off a character while we hear Curtis do a monologue over it. I’m chalking that up to this being the middle movie of the trilogy and they must be setting something up for next year.

The kills in this movie are plentiful with many being on screen. We get a face destroyed with a metal tool, fluorescent bulb to a neck, a knife to an eye, eyes gouged out, a nasty neck snapping, hands are slashed, and a head hits the pavement exploding like a smashed pumpkin. We also get to see Lindsey go to town on Michael with a bag of bricks, which was sort of fun. Some old favorite characters die on screen, and they are all decent sendoffs. If you like gore and creative kills, then I think that Halloween Kills is going to be a good time for you.

I saved this movie for Halloween, and I know that a lot of fans are tearing this one up. It seems that you either like it or hate it. Here is my final take on the movie. While not as good as the previous flick this one has a lot going for it. Yes, as I’ve stated there are some problems, but I’m cutting them some slack due to them needing to setup the next flick. This is a very common thing to happen when you have a planned trilogy. I have hope that when we see the final movie that Halloween Kills is going to have aged well. Obviously, I’m recommending this one.

Posted by Gutmunchers Lives at 3:32 PM