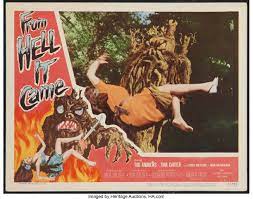 I hate the phrase “So Bad it’s Good”. That makes no sense at all to me. If you are enjoying a movie then either intentionally or in many cases unintentionally it is entertaining you and therefore not a bad movie. Sure, sometimes you are laughing when you aren’t supposed to be, or the movie is so ineptly made that it is fun in a way that the filmmaker didn’t intend it to be. But a bad movie is just that, bad. With that rant out of my system we need to talk about From Hell it Came.

The movie takes place on an island in the Pacific. The action opens with a man, Kimo, being executed by his tribe for the crime of trusting Americans. It seems his father was the chief and when he got sick, he took him to the doctor rather than the witchdoctor. He died so Kimo also must die. Though it is clear that the new chief and the witchdoctor were in cahoots to poison the former chief and blame it on the Americans. Kimo is killed and buried, but not before vowing his revenge. He returns as a tree monster named Tabanga and slowly shuffles his way to payback!

This is an extremely slow and talky movie that is mercifully short seventy-one minutes. The dialogue is terrible with stilted “native” speak from the actors portraying the islanders and emotionless performances from those playing the American scientists. There is silly talk about the “devil dust” aka. fallout so they manage to work radiation into the story. Ironically, it is destroying the tree devil Tabanga before it can get revenge but luckily the scientists treat it with a handy dandy serum that allows it to get up and start killing. There is also an English woman who runs the local trading post that has the most annoying accent I’ve heard in a movie before. My normally lovely wife was rooting for the Tabanga to get her. 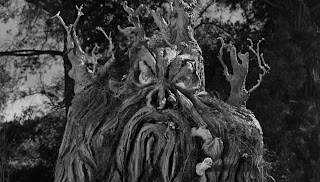 There is no reason that this movie should get a good review from me, right? Well, we haven’t talked about the creature yet. The monster in From Hell it Came is legendarily goofy looking. They took the tree monster to heart and designed a rubber suit that not only looks like an overgrown tree stump but moves on the screen like one. It plods along and hopes that either the actor/victim falls into its barely mobile arms or trips and falls. This happens quite a bit, so the monster has some success getting revenge. Toss in a weird looking giant face and beating heart that pulses only in the closeups and you have an endearingly silly creature.

Despite all the bad things, the lack of plot, mediocre acting, and silly creature design I can’t help myself but to dig this movie. I know it’s not well made, but that doesn’t matter. I find some enjoyment out of how ridiculous the whole thing is. Honestly, who thought a tree monster would be a good idea? More importantly who thought a monster who could barely walk was the way to go? Whomever it was I want to thank you for making From Hell it Came.

Just to tie this into my rant at the top of the interview the fact that they were trying to make a serious movie and accidentally made what I think is one of the funniest flicks of the fifties, is why I like it. Yes, the movie is poorly made but it isn’t bad if it can entertain intentionally or otherwise. Again, be warned this is not a well-made movie, but is part of the appeal and charm. Sometimes silly can be fun so if that is your sort of thing then check it out.