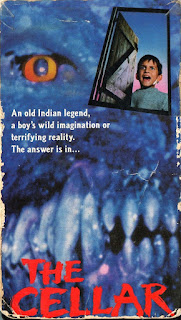 I’m a big fan of director Kevin S. Tenney. I mean he made Witchboard, Brain Dead, and Night of the Demons for crying out loud! What isn’t to love? When I stumbled over The Cellar and realized it was one of his movies that I hadn’t seen before I was very excited to check it out.

We get a voiceover talking about Native American legends and of the great war against the white man. They apparently summoned an evil so great that it killed both Indian and white man alike. It was banished beneath the ground and watched over by generations of shaman but of course this was screwed up by some greedy oil men. They pull a talisman out of the ground and things go sideways. This is how the movie starts.

After the credits we are introduced to a family who move into the house decades later. The old man, who was a young boy in the flashback, doesn’t want to sell the place but is bullied into it by local oilman named Boatwright. He wants the family to live there because that means his new engineer, the dad, will be close and ready to work. They buy the place, move in, and immediately things go nuts. The preteen son figures out shit is wacky right away, but of course no one believes him. So, he has to go “Kevin McAllister” and booby trap the house to protect his family. This all leads to a showdown where they blow the monster back to hell… or at least back underground. Not sure what happened.

I’m disappointed in this one. I found out after doing my research after watching the movie that Tenney was brought in after the first director “left” the project. The story and script aren’t his and it shows. The story is oddly slow and muddled. It can’t figure out if it wants to be a real horror flick or a kid’s movie with the boy being the hero. Because it straddles the line it fails at both. Too disturbing for the youngsters (they kill a bunch of puppies damn it!) and not nearly enough gore for the grown ups The Cellar is boring. Sometimes if you attempt to appeal to everyone you end up appealing to no one. This is one of those times. 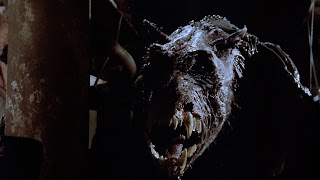 I found this to be a bummer because the cast is solid with many familiar “B” movie faces. Don Collier, Patrick Kilpatrick, and Ford Rainey are doing their best with the script that they are given. Again, it isn’t much to work with. Though my biggest complaint is that the late great Lou Perryman is wasted in what could have been a scene chewing masterpiece as Boatwright. He never gets enough screen time to be much of a human villain/buffoon. This movie really needed to figure out what it wanted to be.

The creature design is not too shabby. It clearly doesn’t move that well, so Tenney keeps it partially hidden with boxes, rocks, and keeping the scenes dark. But what we do see is good. I will never complain about an honest to God latex monster in my movies. The kills are tame and not much to talk about. We do have a fun gag with some fingers and barbed wire though that is about it. This also makes me wonder if they weren’t sure what rating and what audience they were going for.

In the end I can’t recommend The Cellar. It is a bit of a mess and while there are some positives overall, I found the movie to be slow and annoying. I just didn’t like the story. Tenney was clearly a director for hire on this troubled project and it simply isn’t up to the quality that I expect from his output around this time. Go watch Night of the Demons or Wtichtrap instead.

Posted by Gutmunchers Lives at 6:48 PM