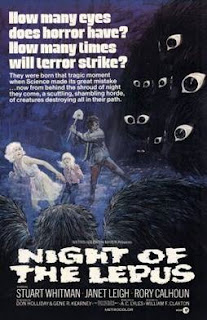 The movie opens with a grave warning about messing with the environment. It uses the example of a population explosion of rabbits after the natural predators have been wiped out. It shows just how destructive they are before the credits roll. Then we meet a rancher who loses his horse when it breaks it’s leg in a rabbit hole. Frustrated he calls his friend Elgin at the college for help. In turn he enlists a scientist named Bennet to look for a solution.

The twist is that they don’t want to use poison or pesticides to eliminate the rabbits. Mostly due to the threat of what it could do to the other animals and the land. So Elgin tests out a serum that will cause birth defects and kill enough of the offspring to keep the population under control. He is testing them on some captured rabbits, one of which his daughter takes a liking too. She swaps it for one out of the control group without them knowing and then asks to keep it. Well the thing gets away and rabbits doing what they do soon all the rabbits are suffering the effects of the serum. What they didn’t realize is the result are rabbits that are very hungry and never stop growing. Now they are as big as cars and killing everything in their path.

Giant killer bunny rabbits… that is a silly idea for a movie. If I’m going to be honest it really doesn’t work as a monster movie. The filmmakers do their best to try and make them look terrifying, but I never thought our characters were in any real danger. No matter how big they are these are just fuzzy bunnies after all. There aren’t any chills or terror to be had in Night of the Lepus, but that doesn’t mean it isn’t a good movie, intentionally or otherwise. This is an entertainingly funny flick that I’ve always enjoyed. I love how much the actors sell the story and play it straight. This is what those modern filmmakers that make silly parodies are trying to achieve, only here it works because everyone was taking the project seriously and doing their best work.

The cast is incredibly good for what is really just a silly drive-in movie. Our rancher is played by the legendary Rory Calhoun, who most of you reading this will know from Motel Hell but I remember from so many westerns I watched as a kid with my grandpa. Stuart Whitman who had a long career in television and movies as well as being nominated for an Oscar (sadly not for Night of the Lepus) is the scientist. His wife is played by the legendary Janet Leigh of Psycho and The Fog fame. Yeah, she is Jamie Lee Curtis’ mom too, but I love her in Carpenter’s epic ghost story. This is also notable as DeForest Kelly’s last non Star Trek movie role. There is a ton of talent here.

The special effects work is solid. The rabbits are brought to life with the use of miniature sets and an admittedly silly looking costume. The miniatures look decent and are top notch work for that sort of thing. The rabbit getup that they stick someone in to interact with the cast looks like one of the creatures you would see on Lost in Space. Which is to say not very good. Though this didn’t bug me too much as it sort of all plays into the charm of Night of the Lepus.

Paced well with lots of action right away this movie never lets the audience think too much about what they are watching. Sure, it is silly, but if it entertains then who cares? I certainly didn’t and recommend this movie. Sit back, turn your brain off, and enjoy.

Posted by Gutmunchers Lives at 12:43 PM