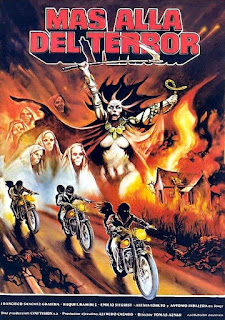 Time for me to dig deep into my pile of movies that I keep intending to watch. I plucked this Spanish horror flick out and popped it in. What I got was a weird Devil worshipping ghost revenge flick. Yeah… it’s complicated.

The movie starts off with a woman getting picked up by an older man for a rendezvous. She doesn’t want to be seen canoodling, so she takes him into the middle of nowhere. Well, that is a red flag for sure.  She tries to lift his wallet and gets slapped around for her trouble. That leads her to brutally stabbing him to death. Okay movie you have my attention. The woman, Lola, calls her brother to pick her up. The pair of them meet up with a couple more friends.

What do happening kids do when they have spent all the money Lola stole from the dead man on some weed? I guess rob a diner/bar. This leads to a shoot-out, lots of deaths, and a couple of hostages. They crash the getaway car and end up murdering an old woman and young boy. That was a mistake since she was a witch/devil worshipper. The remainder of the movie is them getting stranded, weird stuff happening, some brother on sister stuff I’d rather forget, and revenge!

This movie disappointed me. The start with the crime spree is violent and interesting. The kills are great with some stabbing, shooting, and face slashing. I was really digging the it, but then things go sideways. After they kill the old lady, and she calls on Satan to punish them this becomes a very slow burn horror flick. They get stranded at an old church, meet a kid, hear weird noises, hook up, and generally talk a lot. The pacing slows down to a crawl, which is more noticeable with how great the movie started off. Now I suppose that we do eventually get a decent ending, but the last third of the movie is painful to sit thru. 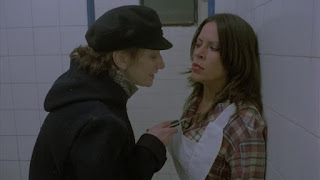 The death scenes are much better during the crimes than the revenge/horror part of the movie. The stabbing is well executed and the mini massacre in the bar is nicely done. Though I will give the movie credit that the last kill in the church with an exploding head is the best by far, so the witch’s finale is good. But the rest of the revenge kills are off screen and rather tame. That was a bummer as I had hoped for more.

The lighting, especially when they are in the old church and catacombs beneath, is decent and adds to the atmosphere of the movie. I also loved the soundtrack that has those unique European late seventies and early eighties vibes. My toe was a tapping to the jazzy tunes. We also get some cringeworthy uncomfortable bits with the extreme violence, killing a kid, some sexual stuff, and of course the sister “servicing” her brother. Though I must be honest that relationship is just established with a bit of dialogue, so I’m not sure if that was in the original script or if liberties were taken in the subtitles. In the end there was a lot to like here but the last forty minutes of the flick just killed it for me.

If it isn’t obvious yet I’m not going to recommend Beyond Terror. While not awful it is far too slow to be considered a good use of your viewing time. Take it from me there are much better things to watch.