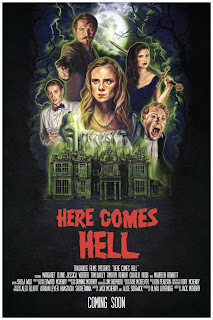 A group of friends meet at an old estate to have a party. You have a rich man and his spoiled sister, another a tennis pro and his new girlfriend as well as an oilman with issues being a junior. They get their drink on when the host, the rich man, springs on them the fact that the house once belonged to a powerful magician. They are going to have a séance to try and contact his ghost. The medium arrives and they get to summoning the spirits.

You know I’ve seen enough horror movies to know that this sort of thing never goes well. Sure enough the medium gets possessed and violence ensues. One by one the characters are killed until the last couple decide to go into the basement and close the door to hell that they opened. Or rather Ichabod, the ghost they conjured, has opened. Seemed he was evil and had some unfinished business about summoning demons to destroy the world. Again, booze and a séance don’t mix.

This isn’t a perfect movie and won’t appeal to everyone, but I loved it. The movie is shot as if it is from the thirties or forties complete with costumes, train travel, and an antique car. To further this the movie is in black and white as well as a 4:3 ratio. Not only that but they take the time to use matte shots and several other tricks from the early days of movie making. Heck there is even a sequence of character driving in a car that is obviously fake, but they go out of their way to make it look “old school” fake, if that makes any sense. This stuff is subtle, but it really does make Here Comes Hell feel like a seventy-year-old flick in all the best ways. The dialogue and performances also support this. There is a certain cadence to the dialogue and style to the acting from older movies that always seems to be missing when someone attempts a project like this. Here it is spot on and I took notice of that. Again in all the best ways this feels right.

Though there is a big twist in that about halfway thru it gets bloody and sports some decent gore. The movie transitions from classic horror to Evil Dead type mayhem. Now I’m not saying this is as good as Rami’s flicks, but it has the same go for it vibe that I got a kick out of. The makeup effect work is very good for the low budget. You get a headless body chasing them around, several cast members go “demon” as they get possessed. We also get a head blown off, a finger chomped, a random dinosaur hand, and a melting hand!

Both the quality and volume of the effects work as well as them managing to create an accurate setting for a movie set in the past is a heck of an accomplishment. They didn’t have a huge budget but had the location and obviously the talent to pull it off. Here Comes Hell also has some great dialogue including one-liners like “Don’t mess with Texas” and “The party’s over”. I realize out of context they don’t seem all that great, but the delivery and timing make them highlights that made me chuckle.

I liked the movie and what the filmmakers were trying to accomplish. Independent low budget movies are where most of the creativity in the horror genre is coming from and honestly always has. Here Comes Hell is the sort of movie that we as fans should be supporting. I can’t wait to see what those involved do next. I highly recommend checking it out. As of the writing of this review the movie is streaming on Shudder.

Posted by Gutmunchers Lives at 7:02 PM