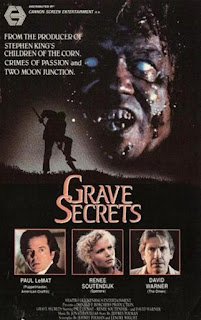 I was in the mood for a good ghost story, so I dug thru my pile of stuff and found Grave Secrets. I’ve never seen it before, but it was pitched on the back cover as a haunted house flick. A new haunted house movie was exactly what I was looking for. I decided to check it out and see what I was missing.

The movie opens with a woman driving an injured man somewhere. He wakes up and grabs at her causing a crash. She survives and he doesn’t. Not only that but it is a big mystery because she doesn’t tell anyone about the wreck and since he had no ID nor his head, they never identified his body. Sometime later she shows up at a lecture being given by an academic about paranormal happenings. She offers him money to come check out her bed and breakfast because she has been hearing weird stuff.

When he arrives, she tells him to go away, but he doesn’t. Instead, he experiences some odd things and figures out that she is haunted. But why? And who is the spirit that is torturing her? I guess it is the man from earlier that we knew about but that none of the other characters do. Toss in some unpleasant locals, a horrible crime that is sort of glossed over, and a ghost that magically becomes a zombie before turning back into a ghost when the spirit of a baby kicks his ass, and you have Grave Secrets. Okay that last bit might have been a spoiler… my bad.

I was disappointed in the movie. It had all the potential in the world to be a spooky movie with a creaky old house in the middle of nowhere. There are times that they use the house and shadows to begin creating an atmosphere, but then ruin it with something silly. Like the ghost throwing eggs at our investigator in some sort of attempted slapstick humor. There is also a grad assistant that shows up to serve as annoying comic relief. This occurs all while we are supposed to be spooked out. This mixed tone destroys any possible momentum that the movie might have been able to build. They even waste David Warner as a medium who is in the movie long enough to get slapped around a bit and exit via an ambulance. I get you might have only had him for a couple of days but at least give him something to do!

More attempted laughs then scares are annoying but if that were it I could maybe shrug and say it was worth a watch. But the movie kind of glosses over a horrible crime. Before I continue, please stop if you are wanting to avoid spoilers. There is a big one coming. Our female lead is haunted by her father who molested her as a child and then showed up long enough to rape her as an adult. She got pregnant, had the baby at the house, and he buried it alive in the backyard. It is that baby’s ghost that kicks his ass and saves the day. That is a horrible storyline that could have had some impact but is glossed over and handled terribly. This is the sort of storyline that requires a well written script treating the subject with respect and not just used as a toss away bit of exploitation. That isn’t the case here and for me that was the final nail in the coffin.

There are a few interesting bits in Grave Secrets but overall, I found it annoying and forgettable. There are much better ghost stories like The Uninvited, The Changeling, and The Haunting that you could watch instead of this movie. Do that and skip this flick.