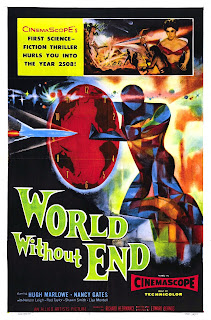 The government has lost contact with the first ship to travel to Mars. Crewed by four men they get caught up in some strange cosmic storm that accelerates them an sends them into the far distant future. Some five hundred years and a couple of centuries since the atomic war destroyed civilization. Crash landing on a healing planet lush with vegetation and filled with mutant monsters they make their way down the mountain. Along the way fighting off mutant cavemen who want nothing more than to destroy them they hide in a cave and discover human survivors. The men of this civilization are all weakly from living underground, but luckily for our virile modern men the ladies are still very attractive. Shenanigans go down because of jealousy, bazookas are made, and the human race is saved!

This is one those fifties movies that hits that sweet spot of being silly and well made. This was an Allied Artists production and was shot in color. If you see a fifties movie shot in color you know that they normally had a decent budget. That is confirmed with a great set for the spaceship. They have all sorts of neat looking instruments and chairs that recline for takeoff and acceleration. When you watch as many low budget science fiction movies as I do you notice these sorts of things. We also get a lot of mutant cavemen and if you pay close attention, they don’t use the same mask for all of them. They all look different which is them paying attention to detail and taking their time to do things right. Like I said this movie is very well made.

Going hand in hand with my point we have the cast. While many of you might not recognize the names much of the cast had long careers and were excellent actors. Hugh Marlowe did tons of television work, but I recognized him from William Castle’s 13 Frightened Girls. The most recognizable face is that of Rod Taylor. He was in so many great movies like Hitchcock’s The Birds and the Time Machine. These are just two of the many seasoned actors and actresses that appear in the movie. Why do I keep mentioning the cast? While the story is paced well and has a lot of science fiction tropes that I enjoy it’s a little dumb. This excellent cast and the production values help to cover this up. At its core this is about how the men have become weak and complacent after living for centuries underground. There is also mention of how few children are being born each generation, which sort of hints at the lack of virility. That of course changes when the time travelers arrive, and all the beautiful women start fawning over them and falling in love. I supposed someone realized that teenage boys were a big chunk of the audience for science fiction, so they played to that. In some respects, this does play like an adolescent fantasy and that has to be acknowledged.

Just to be clear while I was amused by this and wished we had a bit more of a serious story the above isn’t a deal breaker. There is plenty of action including some giant spiders that they have to fight that I totally forgot about. World without End isn’t perfect, but I do like it. I can easily recommend it to anyone looking for some fun mindless fifties’ fun.