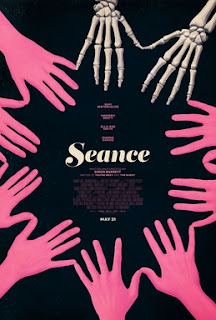 This popped up on Shudder and I’m always down for a new horror flick this time of the year. Honestly Shudder has been releasing some interesting stuff, so I figured what the hell. I mean the movie was pitched as a haunted girl’s school flick so… cool. Be warned I’m going to avoid the worst spoilers but there will likely be a couple just so I’m able to talk about the movie. If that bugs you jump to the last paragraph to see my recommendation.

Students at an all-girls school are in the bathroom trying to summon a ghost. Stuff happens and they get spooked, though it all turns out to be a big prank. Unfortunately, one of the girls, Carrie, ran off to her room and we see that someone or something comes out of her closet and attacks her. Her body is found outside under her window. They think she fell but we know she was pushed! This opens a spot at the very competitive institution, and we get a new student named Camille brought in to take her place and even her room!

The same clique of girls that were around with Carrie start hazing the new girl. She fights back and punches are thrown. This gets them all detention where they decide to work together. I guess working together means have a séance to talk to the dead girl’s ghost. Contact is made and things get spooky from there. Is the ghost come back to get revenge on the girls? Was it even one of the girls who killed her? Or could she be back for some other reason? Oh, and who the hell is Camille?

Séance isn’t a perfect movie by any stretch. There are scenes that seem to go on too long, especially when trying to establish how mean the girls are to Camille. It gets repetitive and the hurts the momentum they have built up. Not sure that this movie had to be ninety minutes long and could have used a few trims here and there. What I did love was the plot itself. It isn’t often that a movie has a twist I didn’t see coming. What I thought was going to be a straightforward haunting turned out to be part ghost story and part slasher. That was a neat trick and was executed well. The identity of Camille and how she connects to everyone was also cool. 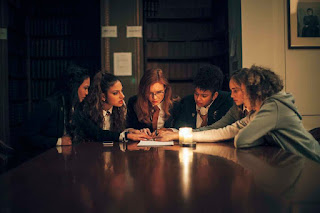 I liked the cast and thought that the actresses were very good in their roles. I also thought that all the supernatural stuff was handled very well. There are some legit creepy bits and scares. They are telegraphed a bit and predictable but still effective. We also get some kills, especially at the end. Throats get cut, necks snapped, and heads crushed. Much of the gore is CGI but they don’t linger and except for that last gag it isn’t too obvious. For a low budget movie I was happy with what I got and applaud their efforts.

This isn’t an all-time classic that I will watch every year, but it is a perfectly good and fun way to kill some time. I always like catching some new movies each October to spice things up and Séance, while mild, fit that need. Head on over to Shudder and check this as well as many of the other fun movies they have available. I recommend it!